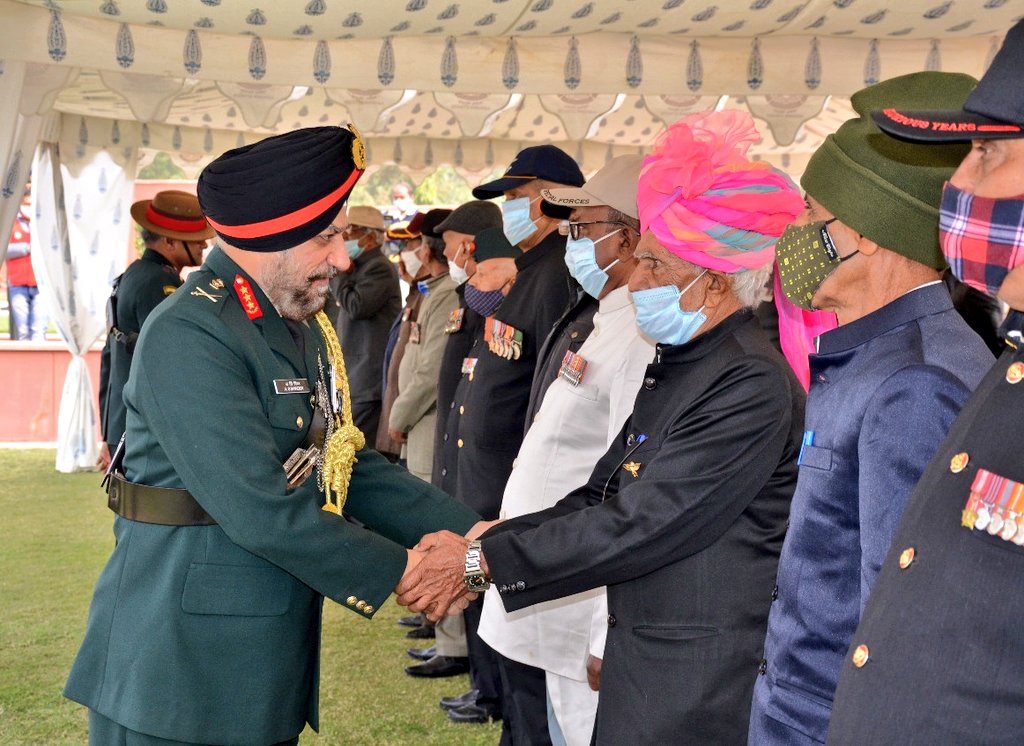 Jaipur, Commemorating the victory of Indian Armed Forces over Pakistan in 1971, Vijay Diwas was celebrated at all stations of South Western Command on Thursday.  Lt Gen AS Bhinder, Army Commander, Sapta Shakti Command paid homage to the bravehearts with a wreath laying ceremony at Prerna Sthal, Jaipur.
The Army Commander greeted all ranks of the command on the occasion and exhorted them to remain eternally vigilant and emulate the devotion and resoluteness of the war veterans & bravehearts, which has bought Indian Army to the pinnacle of professional glory.
Vijay Diwas is celebrated every year on 16 December as on this day in 1971, India defeated Pakistan, which resulted in the unilateral surrender of the Pakistan Army and the subsequent formation of Bangladesh.  The largest military surrender after World War II took place at Dhaka when the General Officer-Commanding-in-Chief, Eastern Command, Lt Gen Jagjit Singh Arora accepted the surrender of 93,000 Pakistani troops from Lt Gen AAK Niazi of the Pakistan Army.  This glorious day in the annals of history of the Indian Army was made possible due to the supreme sacrifice of gallant soldiers during the 1971 Indo-Pak War.  The Indian Army changed the course of history with its undeterred courage, dedication and professionalism, bringing glory and honour to the Nation.

The year 2021 marks the 50th anniversary of victory of the Indian Armed Forces in the 1971 war and the year is being observed as ‘Swarnim Vijay Varsh’ in honour of the Indian Soldiers who laid down their lives in the line of duty.  To commemorate this occasion, four victory flames were lit up at National War Memorial, Delhi on 04 Dec 20 and commenced their journey through the four cardinal directions travelling across the country through the villages of the soldiers who were  part of the 1971 war.
The Victory flame for the Western Cardinal direction traversed through area of Sapta Shakti Command till the month of April wherin a series of activities viz felicitation of veer naris and war veterans, motivation talks for youth, cultural stage shows, Military band displays, marathons and various other events were organised to honour the bravehearts  of 1971 War.  The events were well represented by citizens from all age groups and walks of life.  On Sep 18 to 19 this year a mega event was conducted at Jaipur wherein Mini Marathon, Eqpt display and an Army Multi Activity display were held at Ramgarh Polo ground.