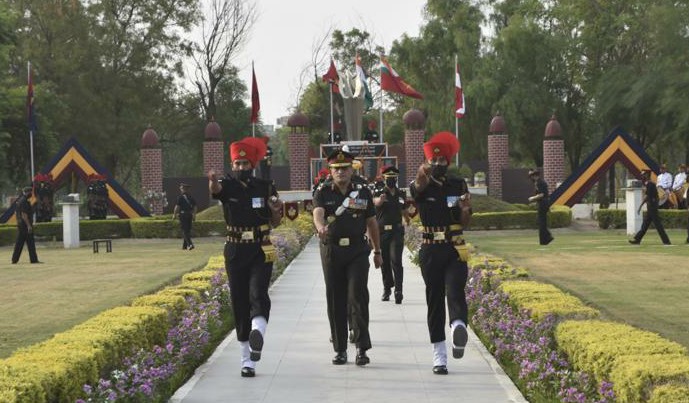 Jaipur,  Sudarshan Chakra Division of Sapt Shakti Command celebrated its 49th Raising Day on 15 July. The Division traces its glorious history to Foxtrot Sector which was raised on 15 Apr 1971 at Ambala Cantt. The sector was re-christened as an Infantry Division on 15 Jul 1972. Over the decades, the Division has endeared itself with the local populace and continues to work in harmony with the local population.
To mark this occasion, a Plantation drive was also carried out by Major General Vikram Varma, General Officer Commanding, Sudarshan Chakra Division and all ranks in which a total of 1100 saplings were planted. A large number of dependents and Ex-servicemen also participated in this drive.
On the occasion Lieutenant General AS Bhinder, Army Commander, Sapt Shakti Command and Lieutenant General MK Mago, General Officer Commanding Chetak Corps extended their good wishes to all ranks and their families. They also complimented the Division for its battle readiness state, steadfastness and exemplary sense of duty. Army Cdr exhorted them to continue to maintain the exalted standards and strive for excellence through professionalism, dedication and devotion to duty.
Sudarshan Chakra Division has lived up to the faith reposed in it by the Nation, be it guarding the borders or activities for nation building. Drawing inspiration from the saga of bravery and sacrifice of their predecessors, the troops of the Sudarshan Chakra Division continue to serve with utmost zeal and enthusiasm. The Division has also provided assistance to the Veterans and Veer Naris by organizing Ex-servicemen rallies and medical/ blood donation camps on regular basis.