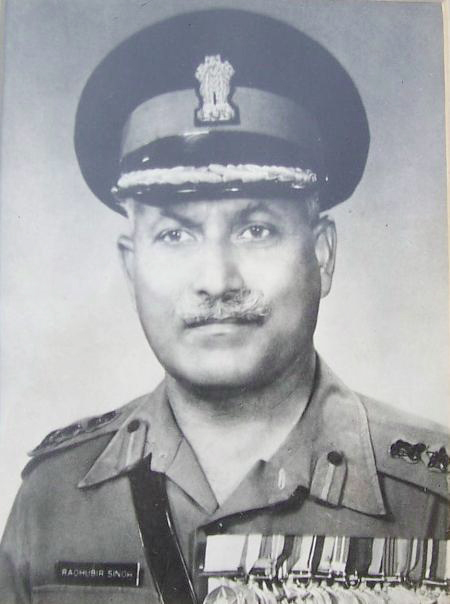 Jaipur:  Brigadier Raghubir Singh, Mahavir Vir Chakra left for the heavenly abode at an age of 99 years, today, on 13th Jun 2021 at 0630 hrs in the due to old age illness. Born on 02 Nov 1923, in Soda village of Tonk District, Brig Raghubir Singh was commissioned on 18 Apr 1943 into the Sawaiman Guards as a Second Lieutenant and fought a number of wars including the second world war. He participated in the Burma war in 1944 and went to Japan to fight. Thereafter, he fought in the Indo Pak war of 1947-48 in the Uri sector immediately after independence. During the war of North and South Korea in 1954, he was posted as Chairman of the Neutral Nations Representative Commission (NNRC) as part of the peace keeping force. During the 1958-59 Israel – Egypt war, he was part of the United Nations Emergency Force.
He was commanding his battalion, 18 Rajputana Rifles (later 11 Mechanised Infantry) during the 1965 Indo Pak war. Leading from the front, he proved to be an example for his men to follow displaying excellent standards of bravery during the battle of Asal Uttar. As quoted in his Mahavir Chakra citation, “In the Khemkaran and Asal Uttar Sector, the attack of the enemy was extremely violent. However, the soldiers of 18 Rajputana Rifles fearlessly confronted the Pakistan Army’s attack and destroyed 22 Patton Tanks of the enemy.
On 09 Sep 1965, under the able leadership of Raghubir Singh, his battalion successfully accomplished the mission and kicked out the Pak Army who had the suspicious motive of reaching Harike in Punjab.” For this gallant act, the then President of India, Dr S Radhakrishnan, honoured Lieutenant Colonel (later Brigadier) Raghubir Singh with Maha Vir Chakra, the second highest gallantry award in the country. During the 1971 Indo Pak War, he effectively handled the post of Provost Marshal in the Military police with the responsibility to look after One Lakh Pakistani Prisoners of War in the Bangladesh Surrender Camp.
Brigadier Raghubir Singh, MVC or ‘Dadosa’ as he is fondly addressed by the present generation was an extremely brave soldier and an iconic warrior. He will be greatly missed by his family and the paltan. He is survived by his son Maj Sangram Singh Rajawat (Retd).