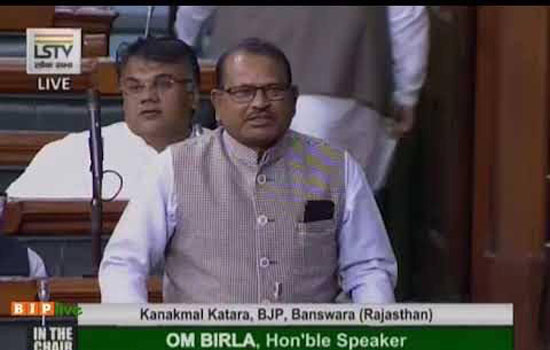 MP from Banswara - Dungarpur Kanakmal Katara has once again raised the issue of the Dungarpur-Ratlam via Banswara rail project . He raised this issue too in the past several years in the Lok Sabha.

He raised the demand for early start of construction work of Dungarpur-Ratlam via Banswara rail project. He has already taken up the matter with the Central Government many times before.  On the initiative of Lok Sabha Speaker Om Birla, he has also raised this matter in the meeting of state MPs held with Union Railway Minister Piyush Goyal recently.

He said that Banswara is the only district in this region of tribal dominated of Rajasthan, which does not pass through rail line any corner.  While it is an important that this rail line connecting Gujarat and Madhya Pradesh with Rajasthan.  It is also important that  an inter-state multi-use irrigation and power project like Mahi Bajaj Sagar is here.Banswara Dungarpur being the hub of textile mills, there are deposits of marble stones and other minerals.

With the construction of this railway line, the people of this tribal area will get employment, as well as the convenience of transportation of commercial products, the railways will also earn revenue and the entire central India will connect with Gujarat Madhya Pradesh  and the whole country.  It will also be a safe rail line in terms of transportion for the Indian Army, as well as tourism of this region will also get a boost.

He said that this railway line could prove to be the lifeline of the tribal zone of Southern Region.  He stressed that if the state government does not bear half of the cost for its contribution, then the central government should not hesitate in bear the entire expenditure for this ambitious project.

Banswada Dungarpur MP Katara's pain is evident,Despite his party's government at the center, his helplessness is now moving towards pleading before Prime Minister Narendra Modi.  He say that he  will meet with the Prime Minister on this issue and make a said story of this tribal region who adjoining Madhya Pradesh and Gujarat in Southern Rajasthan.