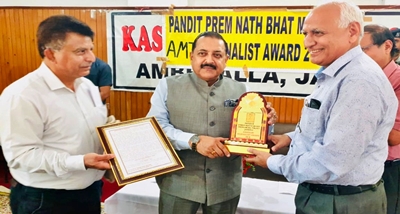 Minister of State in Prime Minister's Office Dr Jitendra Singh has said that it is only Narendra Modi Government which has the capacity and capability to address the aspirations and expectations of the Kashmiri Pandits.

Addressing the Pandit Prem Nath Bhat Amateur Journalists Award function at Kashmiri Pandit  Sabha, Jammu yesterday, Dr Jitendra Singh said that Kashmiri Pandits are the first stakeholders on Kashmir. Kashmiriyat was murdered by those who forced exodus of Pandits in 1989 -90. He assured the gathering that whatever decision is taken by Narendra Modi Government will be in favour of the community. He said, concrete planning will be made on the return and rehabilitation of displaced Pandits to Valley keeping their aspirations and expectations in view.