PM MUST SAY WHAT PROMISES WERE FULFILLED IN 5 YRS: GEHLOT 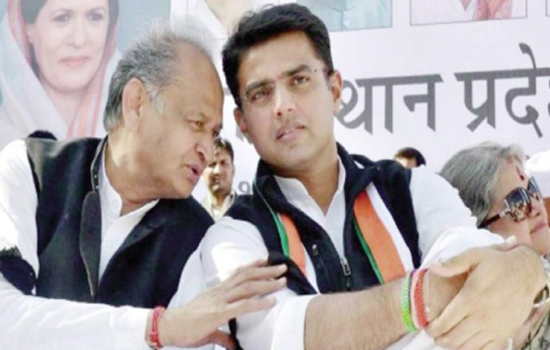 Jaipur Chief minister Ashok Gehlot said on Sunday that Prime Minister NarendraModi should talk about fulfilment of promises he made in last five years and achievements instead only speaking about nationalism and surgical strike.

“The entire country is proud of surgical strike. The country was also proud when Indira Gandhi divided Pakistan into two and liberated Bangladesh; when 90,000 forces with arms had surrendered, AtalBihari Vajpayee had to say than that Indira is face of Durga,” Gehlot said. “The Congress never took political mileage out of it, as there is a protocol. The country is proud of soldiers’ valour.”

He suggested that Uttar Pradesh chief minister Yogi Adityanath should be booked for sedition for labelling the military as PM NarendraModi’s army.

“Yogi ji is saying, ‘this is Modisena’. There should be a case of sedition on Yogi ji. If someone criticises the government, the person is directly called anti-national. But the anti-national person is he who, while being the chief minister, says ‘Modijikisena’ (Modi’s army),” Gehlot told reporters here.

At a rally in Ghaziabad on March 31, Adityanath had dubbed the Army “Modijikisena”, triggering a political firefor storm with the Opposition attacking the Uttar Pradesh chief minister for “insulting and humiliating” the armed forces.

“Where do you want to take the nation? What will happen in the country when soldiers will have their interference here like Pakistan?” Gehlot asked. He said Pakistan had military rule several times, but the defence forces were kept separate from politics in India for the past 70 years. “Our Army protects the nation and fulfils duties,” the Congress leader said, claiming that it was the first time the armed forces were being politicised.

The chief minister said recently some people wrote to the President of India that what is happening in the country should be taken seriously. He cautioned that the youth should be aware of the political propaganda on social media. “Our countrymen, particularly the youth, should not be misled. Modi and his team are brainwashing youths through social media. If you are misled, this will be dangerous for the country,” he said.

Gehlot said citizens suffered during demonetisation. “They were asked to stand on queues, 300-350 people were killed. What wrong had they done? Black money changed to white from back doors of bank; naxalism and terrorism are still not curbed.”

BJP spokesperson MukeshPareek said his party is talking of development of villages, farmers and the poor. In last five years efforts of inclusive development have been made; schemes made in last five years, be it Aayushman Bharat or Ujjwala, have focused on uplift of the poor, farmers’ income has doubled; and MSP increased.