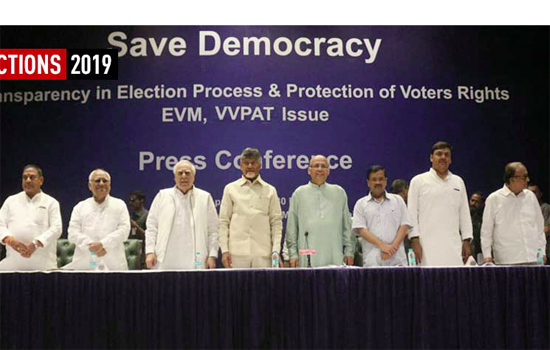 New  Delhi  LEADERS from 21 opposition parties announced on Sunday they will approach the Supreme Court to demand a minimum of 50% of votes cast in the ongoing general elections be verified with a paper trail, ratcheting up criticism of Electronic Voting Machines (EVM) that has becoming a political flashpoint.

At a press conference in Delhi, representatives of the Congress, the Telugu Desam Party (TDP), Samajwadi Party (SP), AamAadmi Party (AAP) and Left parties, among others, said that a large number of EVMS had malfunctioned during the first phase of polling on April 11, and that to restore the credibility of the electoral system, at least 50% of votes cast had to be checked with the Voter Verifiable Paper Audit Trail (VVPAT) system.

“We are going to politely seek politically in the country through a campaign and legally in the court that at least a 50 % sample check is of vital importance. Otherwise a serious question mark arises on the process,” said senior Congress leader Abhishek Manu Singhvi, adding that the top court had “in principle” accepted the opposition’s arguments.

Under VVPAT, a paper slip is generated showing the serial number, name and symbol of the candidate a voter has chosen, and displayed through a transparent screen for seven seconds before getting cut and deposited in a box. In a ruling last Monday, the Supreme Court had asked the Election Commission (EC) to increase random matching of EVMS to VVPAT slips from one to five in a constituency. The decision had come on a petition by leaders from 21 opposition parties that had demanded 50% VVPAT verification.

Currently, a five-member team including the returning officer select the EVMS, where the vote count will be matched with paper slips.

The EC has come under heavy political fire from opposition parties since the end of the first phase last Thursday, especially from Andhra Pradesh chief minister Chandrababu Naidu, whose Telugu Desam Party (TDP) is fighting to retain control of Andhra Pradesh, the state with the largest chunk of LokSabha seats in the first phase.

The state is also holding simultaneous assembly elections. Naidu claimed that 25% to 30% of the EVMS malfunctioned during the initial part of the day, which led to polling going on till the early morning hours of Friday in some booths. “Is this democracy?” Naidu asked. On the day of voting, several people had taken to social media saying they were unable to vote because of EVM malfunction or because their names had allegedly been deleted from the voter rolls.

He said that the opposition parties would go for a fresh petition or a review petition. He said the results should be announced after counting 50 % of VVPAT. “Why are the BJP and its allies opposing the decision? They have to answer now. Why is the election commission not acting impartially? Ultimately, We are left with the court. Again, we will appeal to the court. We will ask the Supreme Court to do justice, to save democracy,” Naidu said.

“If you can see your cell phones, every six months you change it because the technology is changing. But here, for the last so many years, the same EVMS (have been used),” added Naidu. “We are raising doubts about the EVMS. The confidence of the voter can only be restored through paper trail machines.”

He had met chief election commissioner Sunil Arora on Saturday but indicated that the meeting had not yielded a resolution. EVMS were first used for a nationwide election in the 2004 LokSabha polls.

“Questions were raised after the first phase of elections, we don’t think the EC is paying adequate attention. If you press the button before X party, vote goes to Y party. VVPAT displays only for 3 seconds, instead of 7 seconds,” Singhvi said.

Kejriwal accused the EC of not paying heed to the complaints of EVM manipulation. “The machines are not faulty but they are programmed like that. When they are detected, it is said the machine was faulty. It cannot be that every time a machine was found faulty, the votes invariably go to BJP. I am an engineer, understand technology. Have you ever seen TVS or refrigerators developing faults on such a scale?”

Senior Congress leader KapilSibal said EVMS could be manipulated and it could even be demonstrated. “We will need a machine for it,” he said.

Naidu also accused the EC of inaccuracies in its affidavit to the apex court, and pointed out that a number of developed countries – such as Germany and the Netherlands – had gone back to paper ballots.

“They are saying (it will take) six days to count an assembly segment. Is it fair? We were in paper ballot. It used to take 12 hours to 18 hours, or maximum 24 hours. I contested first election in 1978, only paper ballots. It is very simple also. It is a simple slip, at the top name of the candidate and symbol. You want to segregate, it is not much time. You can also count at the same time, it is very easy.”