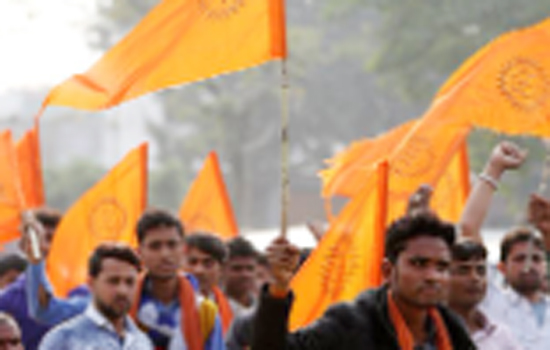 New Delhi, Vishwa Hindu Parishad (VHP) will begin a nation-wide Chanting of Vijay Mantra by the first rays of the rising sun on Saturday, April 6, 2019, which also marks the Hindu New Year 2076, according to the Vikram  Samvat calendar. Dr Surendra Jain, VHP Jt. Gen Secretary today said that preparations for the Anushthan, which is a nation-wide mass awareness programme also, have almost been completed. The Chanting of 13 crore Vijay mantras will remove all the obstacles that have, till now, impeded the construction of the grand Shri Ram temple in Ayodhya.

Dr Surendra Jain added that carrying out the chanting of mantras on the very first day of the Hindu New Year (Nav-samvatsar) is very significant as it is Anand Samvatsar. According to the saints and astrologers, the sunrise of the first day of the Anand Samvatsar marks the beginning of the "Pushp constellation" which is considered the most auspicious occasion for Sarv-Siddhi-Yog (an auspicious time when one can accomplish everything). On the occasion of this auspicious constellation, any resolution, which is pure and clean, will come true.

This is why, the saints, during the Dharma Sansad (religious congregation) organised in Kumbh at Prayagraj, had called upon all Ram bhakts (devotees) to chant it 13 crore times, "Shri Ram Jai Ram, Jai Jai Ram," a 13-letter Vijay Mantra, so that all obstacles coming in the way of construction of the grand Shri Ram temple on his Janmabhumi (birthplace) could be removed.The Dharma-Sansad held on Feb 01 for Shri Ram temple construction, called upon every Ram bhakt, to start the chanting of 13 rosaries, beginning from the rising sun of April 6. According to VHP, the Chanting of this Vijay mantras does not call for any special religious preparations or consecrations. Ram bhakts can carry out congregational mantra chantings even in their homes, however, if it is performed in temples, parks, or public places, then it will have a more powerful outcome.

The saints have called upon all members of society, family, neighbour, relatives, friends, children, aged, women and youth to come forward and participate in the pious work. VHP workers have already started helping Ram Bhakts to take part in it in large numbers. The resolution passed in the Dharma-Sansad is of the firm belief that the chanting of Vijay Mantras done during the Sarv-Siddhi-yoga will have its desired effect on construction of the grand Shri Ram temple in Ayodhya by removing the obstacles from its path.

VHP has called upon all the Ram-Bhakts to participate in this chanting of mantras in large numbers and get blessed with the holiness of the chanting.