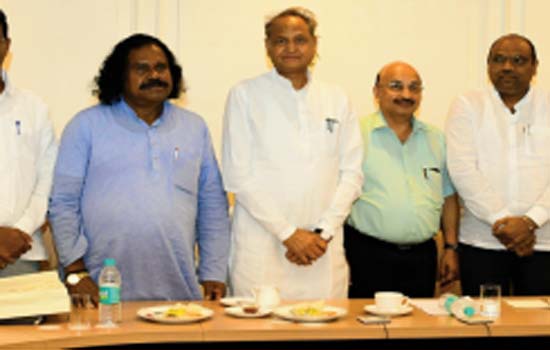 Jaipur: Chief Minister Shri Ashok Gehlot has asked forthe additional financialsupportandfundsfromthe15thCentral FinanceCommissioninviewofthestate's extreme geographical and social conditions, availability of limited resources and future needs of Rajasthan. He demanded for additional funds for the drinking andirrigationwater,educationandhealth facilities, development of roads, energy, IT and tourism sectors. He said that Rajasthan government had done effective financial management of its financial resources and managedtocomplywiththeFRBMActdespite huge debt pressure on the state exchequer due to various social security schemes, 7th Pay Commission, UDAY Scheme and waiver of farm loans to the farmers. Shri Gehlot was addressing a meeting with the 15th Financial Commission at the State Secretariat on Monday. He advanced effective arguments supporting the interests of the State and hoped that the Commission would assess special circumstances of Rajasthan and accordingly recommend for an appropriate hike in the funds to be transferred by the Union Government to the State. Share of States in Central Taxes Should be 50% The Chief Minister demanded for increasing the share of states in the central taxes from present 42% to 50%. He saidthatitwasurgentlyneededtoincrease the share of the states in the central taxes in view of the states' spending on the subjects constitutionally allocated and other welfare services offered by them. Statesshouldgetaptshareinthefunds collected in the name of cess and surcharge as well, he said. Presently, entire funds collected as cess and surcharge are being utilized by the central government. He requested the Commission to recommendthatthestatesbegivenshare inthenon-tax revenuesofthecentralgovernment such as off-shore royalty, disinvestment of public undertakings, auction of spectrums etc. Change in Funding Pattern Affected States Negatively Shri Gehlot said that due to vast geographicalexpanse,incomparisontoother states,inRajasthan,perunit costfordelivery of public services was high. The Commission should take this fact into account while recommending for devolution of the funds, he said. He further added that due to recent changes in the funding pattern of the centrally-sponsored schemes, the states' expenditure on these schemes has increased. Most of the schemes which were fully-funded by the centre or were in the centre-state funding ratio of 90:10, or 75:25; have now changed to the 60:40 or 50:50 funding ratio. This affected the states' interests negatively, he added. Pay Compensation for Shortage in Revenue Realization onAccount of GST upto 2025 Th e C M d e m a n d e d th a t th e Commission should recommend to the centre to extend the period of compensatory payment to off-set the shortage of revenue through GST collection upto year 2024-25. He added that the Rajasthan had to undergoanadditionalfiscalburdenofRs. 62,000 crore on the state exchequer due to UDAY scheme. He asked for the specialfinancialsupportfortheStateDiscoms. He suggested that the State government had to give subsidy to the farmers as they wereusingmoreelectricitytoextractunderground water. Grants for Local Bodies be Hiked by 2.5 Times Shri Gehlot said that the Panchayati Raj Institutions (PRIs) and Urban Local Bodies (ULBs) were facing financial crisis in almost all states. In this context, he asked theCommission to recommend for at least 2.5 times increase in the grant for the PRIs and ULBs, as was recommendedby the14thFinanceCommission as well. He further asked for the additional funds for ULBs for lining up more resources for the flagship schemes like the Swatch Bharat Mission. Sans Planning Commission, Finance Commissions is States' Hope The Chief Minister said that after disbanding of the Planning Commission, in the context of the finances, the Central Finance Commission was the only hope for the states. Thus, the Commission should have a sympathetic approach towards the states. He said that these days, the country's economy was facing slowdown and the GST collections were falling. In this scenario, the states were also suffering. This year, Rajasthan received Rs. 1,800 crore less from the centre.Shri Gehlot said that the automobile,transport,textileandmanyother sectors were facing crisis, but the Rajasthan government was making its best efforts topromotethesesectors.ChiefSecretary hasalreadyheldaseriesofmeetingswith the entrepreneurs of these sectors, he added. Central Assistance is States' Constitutional Right: Commission During the discussions, Chairperson of the Commission Shri NK Singh said that the financial support from the Centre was the constitutional right of the states. The Commission would be balanced and sympathetic in its approach and assess and calculate all the needs and situations of the state while finalizing its recommendations to the Centre.In the beginning Chief Secretary Shri DB Gupta welcomedtheCommissionChairpersonand its members. Additional Chief Secretary, Finance, Shri Niranjan Arya gave a presentation before the Commission and requested to give recommendation for increasingtheborrowinglimitoftheState. AdditionalChiefSecretariesandPrincipal Secretaries of various departments gave the presentations of their respective departmentsandrequestedforallocation of funds accordingly.Member of the Commission Shri Ajay Narain Jha, Dr. AnoopSingh,Dr.AshokLahiri,Dr.Ramesh Chand, Secretary Shri Arvind Mehta, Deputy Chief Minister Shri Sachin Pilot, Members of the Council of Ministers, Economic Advisor to the CM Shri Arvind Mayaram,Advisor to the CM Shri Govind Sharma and other officials were present in the meeting.