It is depression not recession or slowdown : Subramanyam Swami 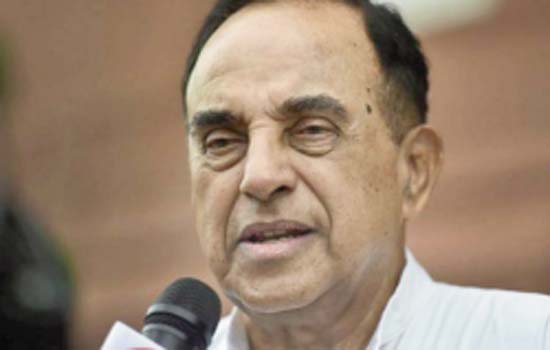 India is facing the worst economic state in the last five years.Industrial output in 11 of the 23 manufacturing segments contracted inApril-June 2019, compared with the same period last year. Peenya Industrial Complex is Bengaluru’s jewel with more than 5 lakh people being employed in over 8000 MSMEs. But today, due to the economic slowdown, the companies are experiencing a 20-25 per cent dip in their businesses across industries. While many companies in the hub focus on production, maintenance and service of various disciplines of packaging, garments, lubricants, consumer items, pharmaceuticals and cross-sections of other industrial activities, the primary focus in the industrial estate is to do with engineering services. Those industries working with the automobile and construction sector are finding it hard to manage with many having ceased production and others shut for a specific duration of time to tide over the crisis. Agriculture sector is also facing a huge crisis as its share in the Gross Value Added GVA in Indian economy has fallen year after year in last five to six years.According to 2011 census 54.6% of the population of the country is still dependent on agriculture and allied sectors. It is eye opening to learn that the agriculture and allied sector’s growth rate which was 5.6 % in 2013-14 suddenly fell after the formation of NDA government in the country in 2014.In 2014-15 it fell down to -0.2, in 2105-16 it was 0.7, then it rose slightly to 4.9 in 2016-17 but could not reach the level of 2013-14 again in five years of Modi government. There has been a large scale migration of agriculture labour and small peasants abandoning agriculture and opting for a life as wage labour. There has been a significant rise in the number of farmers committing suicide as the purchasing power with them has dwindled and they have fallen in debt trap both by fall in yield as well as by low prices of their produce. The data for 2015 clearly shows that the percentage share of farm suicides as a percentage of total suicides has gone up from 8.7 percent in 2013 to 9.4 percent in 2015. The NCRB report said that, “A total of 12,602 persons involved in farming sector (consisting of 8,007 farmers/cultivators and 4,595 agricultural labourers) have committed suicides during 2015, accounting for 9.4 percent of total suicide victims (1, 33,623) in the country.” The National Crime Records Bureau says that they have no data for 2016, 2017 and 2018.Not publishing data since 2015 is a major lacuna and points to another possible case of suppressing facts. From 1995 to 2015, nearly 321,428 farmers have committed suicide in India, according to data from the NCRB. The recession in rural India is caused by the failure of agriculture sector to sustain rural population and also due to recession in real state sector where the migrant labour could find employment as construction labour. The recession in automobile sector is very prominently seen because it is in the urban areas but the truth is that unemployment has made the lives of people every where miserable. Garment sector, diamond sector in Surat, industry and service sector has also seen this recession. Subramanyam Swami , in an interview , has described as depression rather than a slowdown or recession. Raghuram Rajan commented on the statement of the Union Minister Piyush Goyal sarcastically,” When you don’t understand the GRAVITY of the economic slowdown, the words stumble and reasoning becomes feeble,If someone thinks that maths doesn’t help understanding gravity and economics , then it’s a sign that you are hiding the actual statistical data.” The people of India should understand what a blunder they have committed by giving governance in such incompetent hands who want to cover up even economic facts by such false and ridiculous statements.