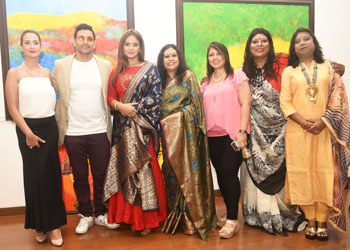 As she sits by her window, the sea simply waves to her. Cresting on the soothing sound of the waves, SanjuktaArun’s works captures the myriad moods of Nature on to the blank canvases, bringing to life, the brilliant blooms, the unstoppable waves, the green covers… Sanjukta captures the essence of life emerging from the sea’s love-play with the skyscrapers in her latest exhibition, Sangam, which also happens to be her 45th exhibition across India and the globe. The inauguration of SanjuktaArun’s show saw a bevy of celebrities and artists who walked in to cheer the noted artist and the children from CPAA. Actors Neetu Chandra, PreetiJhangiani, ParvinDabas and Tina Ahuja, AudiologistSpeech Therapist DevangiDalal, Anita Peter of CPAA, lensmanPradeepChandra,artistsPadmanabhBendre,Devyani Parikh,MadhusudanKumar,AmiPatelandAmishaMehtaamong others were spotted at the do. Children from CPAA, between the ages of 8 to 14, were involved in a unique workshop, prior to the inauguration, where SanjuktaArun was seen guiding the brave-hearts on how to unleash their imagination on canvas through sketch and colours. It was a treat to watch the children at work, against a backdrop of 16 large format works by Sanjukta, created with multiple layers of brush strokes, knife work, stippling work and texture