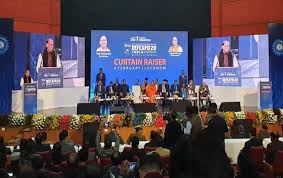 The 11th edition of the DefExpo-2020, a flagship biennial event of the Ministry of Defence, will kick start in Lucknow today. The five-day event will be inaugurated by Prime Minister Narendra Modi in the presence of Union Defence Minister and Local MP Rajnath Singh.

One of the largest mega defence exhibition of its kind is being held for the first time in Lucknow and it will cover the entire spectrum of the country's aerospace, defence and security interests.

This edition of DefExpo promises to bring new technologies, technological solutions, where Defence manufacturing companies from India and abroad showcase their products and services in Defence arena, on a single platform.

Speaking to media persons at the Curtain Raiser event on the eve of the DefExpo in Lucknow yesterday, Defence Minister Rajnath Singh said that the huge participation of foreign countries and exhibitors in the DefExpo-2020 reflects India’s growing stature in the international arena where the world listens to it and powerful nations take pride in marching in step with our country.

Mr Singh said that the stature of India is growing because of the dynamic leadership and vision of Prime Minister Narendra Modi and the country now aspires to be the Economic Superpower in the world.

AIR correspondent reports that more than thousand companies have registered themselves for participating in the DefExpo making it the biggest ever DefExpo to be held in India.

The number of participating foreign companies has also increased to 172 from the previous figure of 160. India-Africa Defence Ministers Conclave will be organized for the first time in which more than 30 African countries will participate.

Ministers from over 40 countries will take part in this edition of DefExpo, making it an important opportunity for countries to further strengthen defence ties with India. Many MOUs are also expected to be inked in this event.

On this occasion, Chief Minister of State Yogi Adityanath said that Uttar Pradesh will use indigenously-developed Dornier aircraft on two routes from Lucknow very soon.

It will be for the first time an aircraft developed by the Hindustan Aeronautics Limited, HAL, will be used for civilian purposes.