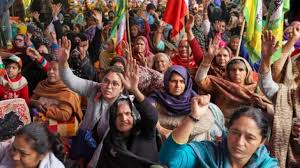 A complaint has been registered against protestors in Shaheen Bagh area of Delhi for blocking the road while protesting against the Citizenship Amendment Act (CAA). According to Delhi Police, the complaint states that immense inconvenience has been caused to commuters as they have to take alternate routes due to ongoing anti-CAA protest in Shaheen Bagh area. For the past 35 days, people are forced to take alternate routes causing immense inconvenience, the complaint said. The complainant has requested the police to lodge an FIR and remove the blockade immediately.

Southeast Delhi Deputy Commissioner of Police Chinmoy Biswal has said that talks are being held with the protesters to persuade them to stage agitation without blocking the roads. His remarks come after the Delhi High Court asked the Delhi Police to look into the matter of blockage of Kalindi Kunj road due to the protest at Shaheen Bagh. The court in its recent order had also directed the police to consider the plight of students who have to travel to schools and also have board examinations. Justice Navin Chawla had further directed the police to consider the representation of the Federation of Sarita Vihar Resident's welfare association. The association had moved the court claiming that there are many students who are facing difficulties during board examinations as the area is closed since December 15, due to ongoing protests against the Act.