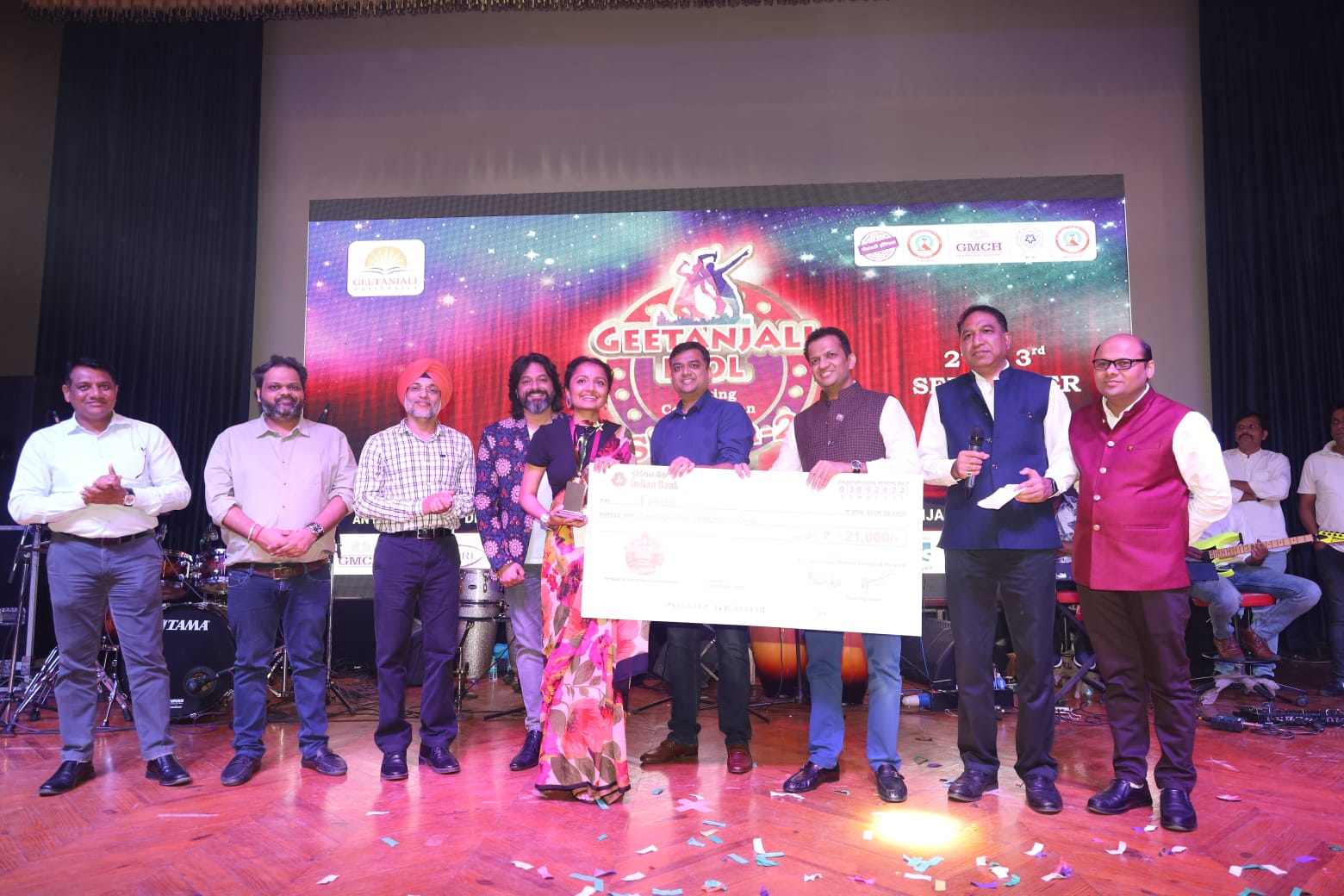 Geetanjali Idol Season-2 was organized on the premises of Geetanjali Medical College and Hospital, Udaipur. The program's main objective is to develop the internal talent of the students along with medical education and give them a platform for overall development.
Under Geetanjali Ideal, students and doctors, the staff of Geetanjali MBBS, Dental, Pharmacy, Physiotherapy, Nursing, Department of Technical Institute, Pacific Industries, Tanz participated enthusiastically. A total of 75 participants auditioned in the program, out of which 21 participants got a chance to show their skills in the final round.
Famous Bollywood music composer Ravindra Upadhyay was invited as a special guest and judge in the program. The other judges were Dr. Harpreet Singh, HOD, Orthopedic Department of Geetanjali Hospital. Geetanjali Group's Vice President Mr. Kapil Agarwal and Chief Executive Director Mr. Ankit Agarwal, Vice Chancellor Dr. Narendra Mogra, CEO of Geetanjali Medical College and Hospital, Mr. Prateem Tamboli were present as the guests of the program. The program was conducted by GM HR B.P. of the Human Resource Department. Under the guidance of Dr. Rajeev Pandya, Students, staff, and doctors of all departments of Geetanjali University participated in large numbers in the audience who came to see the program.
Colorful presentations on Punjabi, Rajasthani, Bollywood, and cultural themes were given by the selected 21 participants, in which the enthusiasm of the audience was seen. The famous singer Ravindra Upadhyay, the program's main attraction, sang the popular songs of Hariyali Banna, Choudhary, and Bollywood songs, which everyone's enthusiasm was seen till late at night.
HRBP GM Rajiv Pandya, the organizer of the program, said that the moment of the announcement of the winners came as if there was silence all around. But as soon as the winners were announced, the whole auditorium reverberated. Anshita Sethia, a student of MBBS (3rd year), bagged the first position, Tushar Maheshwari, a student of GDRI (final year), stood second, and three contestants won the third position which Neurotechnician Rahul Mehta, GDRI 2016 batch Sulgana Tripathi, GDRI (1st year) student Siddharth Singh are involved.
21000/- was given to the first winner among the winners, 15000/- to the second, and 11000/- to the third by cheque. Along with this, the participants who reached the final round were also encouraged by giving them trophies.
GMCH CEO Prateem Tamboli said that after the immense success of Geetanjali Idol Season 1, the enthusiasm of the participants in Season 2 was visible. He also said that it is imperative to have co-circular activities with study and daily routine. Geetanjali University is a student and employee-centric institution, which such a program was organized and will continue to be like this at regular intervals in the future.