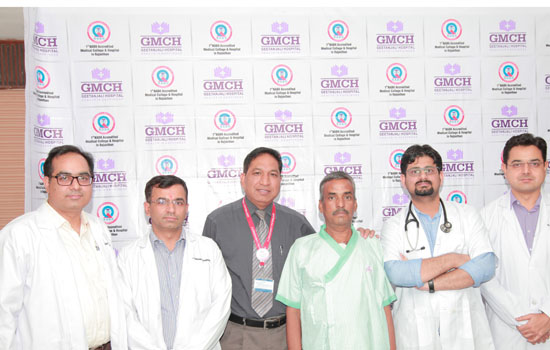 
“Hailing from Chittorgarh District, ASI Rajasthan Police Uday Lal Singh Regar (Age 50 years) suffered from myocardial function or heart attack causing the mec hanical complications of Ventricular Septal Rupture, LV Aneurysm & Valve Leakage. He reported in emergency with chest discomfort, shortness of breath & nausea. On consultation by Interventional Cardiologist Dr. Danny Kumar & investigations of Echocardiography confirmed the major complications which required immediate surgical intervention. If this intervention was not done, then the blood in the two chambers would start mixing and could have filled lungs resulting in major complications. Due to heart attack the patient started having problems in kidneys making it weak. On shifting to CTVS ICU the patient was kept on supplements to recover well from kidney problems. After this, Angiography was performed which one of the arteries revealed 100% blockage and rest were normal to which the patient was then shifted for surgery. In this surgery, 1.5x2 centimeters measuring heart hole in heart chamber (caused due to heart attack) was repaired along with valve replacement of leakage valve and 6x5 centimeters aneurysm in heart was repaired. To best of my knowledge, this is a rare procedure of undergoing simultaneous performing three major & complex heart surgeries in a single procedure & has been claimed to be the first in Rajasthan as no other cases have been reported till date,” quoted Dr. Sanjay Gandhi, the treating Cardiac Thoracic Vascular Surgeon.


“Ventricular septal rupture (VSR) is a rare but lethal complication of myocardial infarction (MI). It is defect in interventricular septum (wall dividing left and right ventricles of heart). It occurs in only 3% of patients out of 100 cases of heart attack; also accompanied by valve leakage (a leaking mitral valve allows blood to flow in two directions during the contraction) & aneurysm (an aneurysm is a bulge in a blood vessel caused by a weakness in the blood vessel wall) with this rupture makes it rarer with a ratio of any one out of 100,000 patients. Treating these complex & rare diseases altogether is technically very challenging process,” said Dr. Gandhi.


CEO Geetanjali Medical College & Hospital Mr. Prateem Tamboli said that, “The Super-Specialty Services under one roof are provided by team of Super-Specialists is a preferred choice centric for treatment. We have been doing consistent efforts to make such rare procedures succeed as at Geetanjali Medical College & Hospital we care about are patients care to our patients. The hallmark of success has been timely and correct diagnosis followed by rare & innovative surgery by a competent team of Cardiac Sciences,” he added.