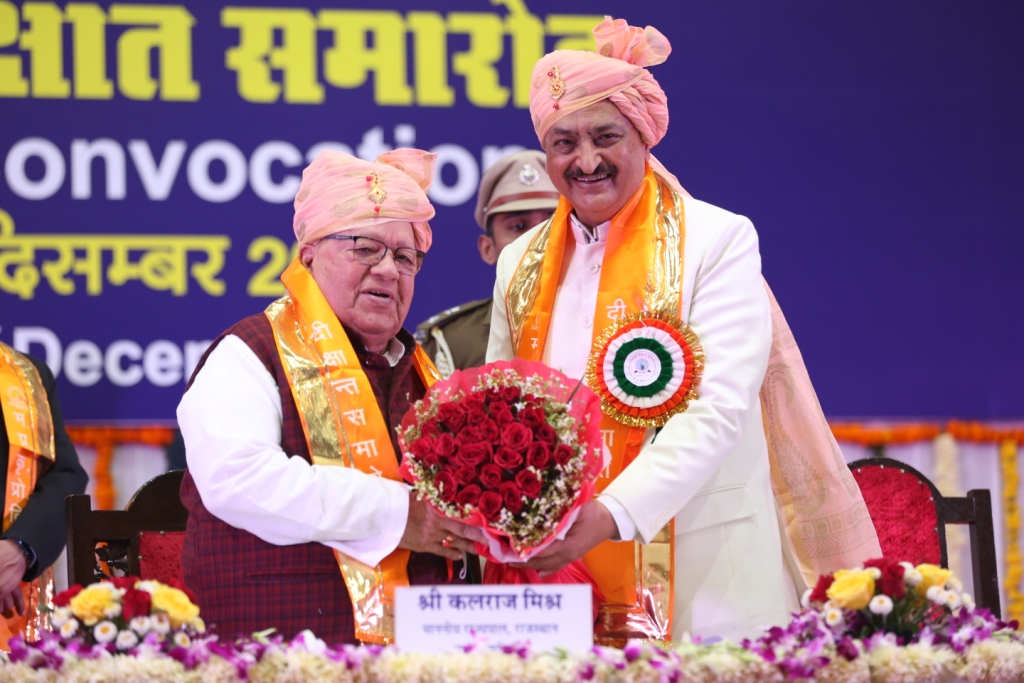 Udaipur:   Governor of Rajasthan and Chancellor Shri Kalraj Mishra attended the 16th convocation ceremony of Maharana Pratap University of Agriculture and Technology at Vivekananda Auditorium on Wednesday 21st December, 2022. During this ceremony he conferred degrees and gold medals to the deserving students.  In the program, the Governor first read the preamble of the Indian constitution and administered the oath to all to follow them and recited the fundamental duties of the citizens.
The special guest of the convocation program Dr. S.L.  Mehta, former Vice Chancellor MPUAT delivered the convocation address.   Vice-Chancellor Dr. Ajit Kumar Karnataka presented the University report with the welcome address.
Chancellor and Governor Mr. Mishra bowed down to Veer Shiromani Maharana Pratap.  He said that the convocation ceremony is a new step in life for the students so that they can spread the light of their acquired knowledge for the development of the society and the nation.
He extended best wishes to all the medal winners and degree recipients.  The Governor said that I wish this university should become the country's main center for research and education in the field of agriculture and technology, for this, it is necessary that by adopting innovation, the university should pay attention to such subjects, which will improve the yield in the fields and according to the local climate, farming will progress further.
Governor Mr. Mishra said that the yield in the agriculture sector has increased during the last few years, but the fertility of the soil has decreased, the area under cultivation has started decreasing.  Along with this, many other problems have arisen in the agriculture sector.
The Governor said that along with the traditional methods of farming, there is a need to think on a large scale on the use of our Vedic tradition of agricultural science and knowledge related to the people.  Under the increase in agricultural production and food security, we now have to adopt a multi-pronged strategy.
Under which, along with food production, work will have to be done in the direction of their storage, food processing, making special production for the needy and providing nutrition to them effectively.  Climate change and global warming are the biggest problems of the present time.  There is a need to think and work on a broad scale on how to balance the agro-ecosystem.  He drew everyone's attention to the new slogan of Jai Anusandhan along with the slogan "Jai Jawan, Jai Kisan, Jai Vigyan" given by the Prime Minister. This university has secured the first position in the state and 15th position in the entire country in the ranking of the Indian Council of Agricultural Research and has also maintained the level of excellence by obtaining certification for five years.  For this, he congratulated the Vice Chancellor of the University and the entire family.  He said that specialist courses and coordinated research should be started in agricultural technology with timely references, so that the youth can face the challenges of global and environmental protection in the agriculture sector.  The Chancellor awarded degrees and gold medals to deserving students from his hands.
.  Vice-Chancellor, MPUAT Dr. Ajeet Kumar Karnataka presented the university report and said that the university has been performing well on all fronts like agricultural education, research and extension.  In the ICAR ranking also, the university has secured 15th rank last year which was 51st two years ago.  MPUAT has the distinction of receiving the Chancellor's Award as the Best University in the whole of Rajasthan.  He told that our best performance has also been recognised in the village Madar adopted on the Smart Village Initiative of the Governor, as a result of which our works in Adopted villages have been designated as model villages for all other universities.
Vice-Chancellor Dr. Karnataka also said that according to the new education policy, three prestigious MoU's have been signed with Namibia University and Western Sydney University, Australia this year to provide international form to education.  In order to provide a broad base to education, research and dissemination, agreements have been signed with 16 reputed institutions so far this year.  Recently 5 of our students have gone to Purdue University, USA for advanced training and 5 students will be shortly going to North Carolina University, USA.  Along with this, a proposal to send three faculty fellows abroad for training has been finalised in organic farming and agricultural research.
The Governor mentioned in his speech on student start-ups, campus placements, all India research projects, development of new varieties of maize, mushrooms and flowers, development of digital technology, installation of agricultural drones and humanoid robots, seed production, fisheries, Pratap Dhan poultry production, agricultural science.  Talked about agricultural extension works being done by the centers in seven districts of the state and in Adarsh Gram, increase in revenue of the university, skill development of farm women, rural youth and faculty.
Dr. SL Mehta gave his convocation address elaborating the success of MPUAT, new challenges in agriculture and future stretegy to be followed for increasing production and food security.  The program was conducted by Registrar Shri Sudhanshu Singh, Controller of Examinations Dr. Sunil Intodia, Dr. Sonu Mehta and Dr. Gayatri Tiwari.  University Media person Prof. Subodh Sharma conveyed that the program ended with the national anthem.  In the beginning Hon'ble Governor recieved the due guard of honour in supervision of University NCC officers Lft.SS Sisodia and Comm.Officer Dr Vishakha Singh. Large number of distinguished Guests, former Vice Chancellor's, HVC, MLSU Dr I.V. Trivedi, HVC RAJUVAS, Bikaner DrS.K.Garg, Board members, Members of Academic Council, Dean's and Director, district Officers, SP Police and other Police Officers, Students parents, faculty members and print & visual media personnels vitnessed the convocation ceremony.