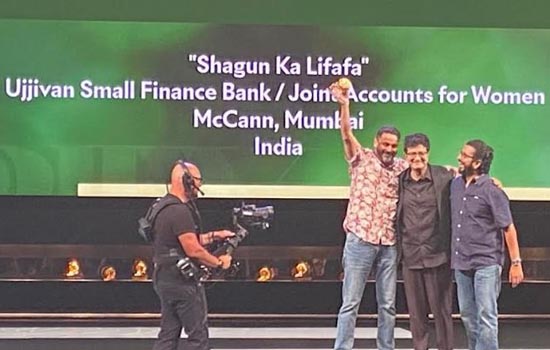 Mumbai : Ujjivan Small Finance Bank’s initiative ‘Shagun Ka Lifafa’ won a Gold at the Cannes Lions International Festival of Creativity, in Creative Commerce category. The initiative aims to give financial independence to women in Tier-II and III Indian cities through a redesigned version of ‘Shagun Ka Lifafa’ - the traditional gifting envelope presented at weddings. The envelopes were redesigned to become joint bank account opening forms, urging women to be actively involved in financial decisions. The creative agency that partnered with Ujjivan was McCann Worldwide.
Ujjivan Small Finance Bank’s initiative ‘Shagun Ka Lifafa’ won a Gold at the Cannes Lions International Festival of Creativity
The initiative was based on the insight that, in the financially backward and economically weaker sections of most Indian households, men oversee the finances, including access to the bank account. As a result, women tend to lose out on opportunities to be financially active or independent. Even among newly wedded couples, every aspect of their life is characterized by togetherness. However, the finances continue to be managed predominantly by men.
Also, Indian marriages, at every strata of society, traditionally see guests bearing cash gifts, called ‘Shagun’. Most of these cash gifts are in multiples of Rs. 100’s, and in round numbers. As per tradition, the Shagun is never a round figure, and hence is always accompanied by a 1 Rupee coin, since this addition signifies prosperity and continuity.
Guests usually place this cash or ‘Shagun’ in a special envelope, or ‘Shagun Ka Lifafa’ - which has a 1 Rupee coin attached for convenience. A variety of lifafas with different motifs commonly associated with weddings were designed and were made available in stationery shops, gift stores and popular wedding shopping destinations. This lifafa was redesigned into an Ujjivan Small Finance Bank Joint Savings Account and presented to the newly-wed couples, thereby inviting them to commence their financial journey together.
Speaking on the achievement, Mr. Ittira Davis MD & CEO, commented, “Ujjivan Small Finance Bank has been championing the cause of financial inclusion among the financially unserved and under-served. With this initiative we aim to redefine financial independence for women in Tier II and Tier III cities. ‘Shagun ka Lifafa’ is one such initiative where we aspire to see the women asserting themselves better as equal contributors to their financial freedom and prosperity.”
Mr. Dileep Ashoka, EVP & Head of South, McCann Worldwide mentioned, “McCann and Ujjivan Small Finance Bank have been in a close partnership for several years with a shared agenda of innovation in marketing communication. ‘Shagun ka Lifafa’ is a testimony to this. This idea hit the sweet spot since it addressed the inherent social, economic and gender inequities that exist in our society. We are elated and honoured that it received the top honours. It is a rare achievement.”