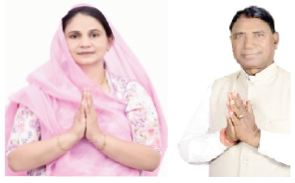 Udaipur: In a major setback to the ruling BJP in Rajasthan and Himachal Pradesh, the Congress won the Mandi Lok Sabha and all three Assembly seats of Jubbal-Kotkhai, Arki and Fatehpur and Vallabh Nagar and Dhariawad where bypolls were conducted on October 30. “Every victory for the Congress is a victory of our party workers. Keep fighting hate. No fear. — Rahul Gandhi, Congress” The Congress retained Fatehpur and Arki seats while it wrested Jubbal-Kotkhai and Mandi from the BJP. In Mandi, former Chief Minister Virbhadra Singh’s wife Pratibha Singh, who had also represented the seat in 2004 and 2013, defeated BJP’s Brigadier Khushal Thakur (retd), a Kargil war hero, in a keenly contested election. Assembly: Assam (5) BJP 3, ally UPPL 2 | WB (4) TMC 4 | HP (3) Cong 3 | MP (3) BJP 2, Cong 1 | Meghalaya (3) NPP 2, UDP 1 | Bihar (2) JD(U) 2 | Karnataka (2) BJP 1, Cong 1 | Rajasthan (2) Cong 2 | Maharashtra (1) Cong 1 | Telangana (1) BJP 1 | Andhra (1) YSRCP 1 | Mizoram (1) Mizo National Front 1 | Haryana (1) INLD 1 Rajasthan Assembly Bypoll Resul ts 2021: Massive Setback for BJP, Congress Wins Both Dhariawad And Vallabhnagar Seats In a massive setback for the Bharatiya Janata Party, the Congress on Tuesday registered a huge victory in both Vallabhnagar, Dhariawad Assembly seats. Congress candidate Preeti Sh a k tawa t wo n th e Vallabhnagar Assembly seat by a margin of 20,606 votes. The par ty also won the Dhariawad Assembly constituency with a margin of 18,725 votesThe elections were necessitated after the demise of Congress MLA Ga j e n d r a Si n g h Shekhawat from Vallabhnagar and the BJP’s Gautamlal Meena from Dhariyawad. Pratibha polled 3,69,565 votes (49.14 per cent) while Khushal got 3,62,075 (48.14 per cent). The victory margin of 7,490 was lesser than 12,626 votes that went to NOTA. In 2019, BJP’s Ram Swaroop Sharma, whose demise in February necessitated the bypoll, had won the seat by a record margin of 3.98 lakh votes. The Congress secured lead in nine of the 17 Assembly segments (part of Mandi Lok Sabha seat), including Manali, Banjar, Anni, Kullu, Bharmour, Kinnaur, Lahaul & Spiti and Nachan. The highest lead of 19,253 votes was f rom Rampur, Pratibha’s native place. The poll debacle is being seen as a setback for CM Jai Ram Thakur, whose constituency Seraj too is part of the Mandi parliamentary segment. The BJP got the highest lead of 19,903 votes from Seraj. The drubbing in all the four seats could make the going tough for CM Thakur as his detractors could raise the demand for change in leadership. Viewed as semifinals ahead of the Assembly elections next year, the Congress won despite facing a crunch of resources. Poll analysts claimed price rise and unemployment tilted the scales in favour of the Congress, though the sympathy factor too worked in favour of Pratibha, whose husband and six-time CM Virbhadra Singh had passed away on July 8.