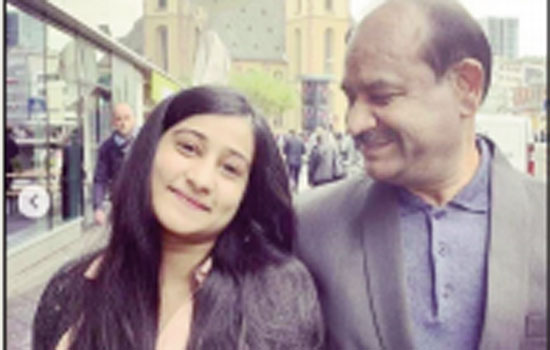 Kota's daughter Anjali Birla has succeeded in the Civil ServicesExaminationorganizedby theUnionPublicService Commission (UPSC). Anjali is the younger daughter of Lok Sabha Speaker Om Birla and Dr. Amita's Birla. After getting the name in the list released by UPSC on Monday, there was an influx of people who greeted Anjali at his residence in Shakti Nagar. Talking to journalistsamidsttheboisterous atmosphere, Anjali Birla said that sheobtainedadegree in Political Science (Honors)fromRamjas College in Delhi after passing class 12 in Arts from Kota' s Sophia School.later, she spent one year in Delhi and prepared for UPSC examination. Giving credit to elder sister Akanksha Birla for getting success in the first attempt, Anjali said that elder sister was the biggest source of motivation during preparation. She not only encouraged him but also contributed fully in the strategy of studies and examination to interview. During this, mother Dr.Amita Birla and father Lok Sabha Speaker Om Birla also motivated to maintain confidence in them. Anjali said that even though shewaspreparingfortheexam,thewholefamilywasalways ready to help and support them. Anjali said that she prepared for 10 to 12 hours per day. Fortheexaminationtoo,hehadchosenthesubjectsofPolitical ScienceandInternationalRelations.Onthequestionofgoing into the field of administrative services even after the political atmosphere in the family, Anjali said that the father is a politician, the mother is a physician, all other members of the family are also involved in some form of social service. She also wanted to stand on her own feet with her hard work and serve the society in a new area apart from family. That is why he turned to UPSC exams.Anjali said that they are ready to join any department and serve, but they will get special pleasure if they get an opportunity to work in the field of women empowerment. she said that parents in Kota usually encourage children to take biology or maths, whereas there is a big world apart from both these subjects. It will be his endeavor to inspire not only the youth here but also his parents to explore a new world by choosing other subjects.