Webinar on “Bundi: Architectural Heritage of a Forgotten Rajput Capital” 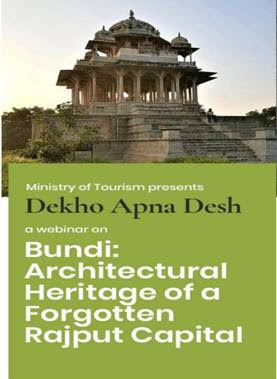 Bundi erstwhile capital of Hada Rajput province known as Hadauti located in south-eastern Rajasthan, is one such place. The webinar was presented by Charudatta Deshmukh, an Architect-Urban Planner, an urbanist with over 25 years of experience in managing planning and design of urban infrastructure and development projects including Airports, Special Economic Zones, Transportation & Urban Redevelopment, Metro Rail, Environmental Sustainability and Slum Rehabilitation. Mr. Charudatta Deshmukh presented a comprehensive understanding of the wealth of architectural heritage of reasons and conditions influencing its creation, challenges being faced by it in 21st century, utilisation of architectural heritage of Bundi as primary driver for growth of Tourism in Bundi and in south-eastern Rajasthan.

Bundi is also known as City of stepwalls, blue city and also as Chotti Kashi. In ancient times, the area around Bundi was apparently inhabited by various local tribes, of which the Parihar Tribes, Meena was prominent. Later the region was governed by Rao Deva, who took over Bundi from Jaita Meena in 1242, renaming the surrounding area as Haravati or Haroti. For the next two centuries, the Hadas of Bundi were the vassals of the Sisodias of Mewar and ruled by the title of Rao until 1569, when Emperor Akbar conferred the title of Rao Raja upon Rao Surjan Singh after the surrender of Ranthambore Fort and his submission. In 1632, Rao Raja Chattar Sal became the ruler, he was one of the most valiant, principled and just kings of Bundi. He built the temple of Keshavarao at Keshoraipatan and Chathra Mahal at Bundi. He became king of Bundi after his grandfather Rao Ratan Singh, as his father Gopinath died while Ratan Singh was still ruling. Rao Chattar Sal died fighting valiantly as the head of his Hada Rajput troopsin the Battle of Samugarh in 1658 along with his youngest son Bharat Singh Rao Bhao Singh, the eldest son of Chhattar Sal succeeded his father to the throne of Bundi.

1804 Rao Raja Bishan Singh gave valuable assistance to Colonel Monson in his disastrous retreat before Holkar, in revenge for which the Maratha Empire and Pindaris continually ravaged his state and forced the kingdom to pay tribute up to 1817. Consequently, Bishan Singh made a subsidiary alliance with the British East India Company on 10 February 1818, which brought him under its protection. He was responsible for the creation of the pleasure palace of Sukh Niwas on the outskirts of Bundi.

Maharao Raja Ram Singh grew up to be a much-respected ruler who initiated economic and administrative reforms and established schools for the teaching of Sanskrit. On the throne for 68 years, he was described as a grand specimen of the Rajput gentleman and "the most conservative prince in conservative Rajputana. At the time of the partition of India in 1947, the British abandoned their soverignity over the princely states, which were left to decide whether to remain independent or to accede to the newly independent Dominion of India or to Pakistan. The ruler of the state of Bundi decided to accede to India, which later became the Union of India. This brought the internal affairs of Bundi under the control of Delhi. Bundi's last ruler signed the accession to the Indian Union on 7 April 1949.

Hoda Rajputs were fierce, fearless warriors often laying down their life at young age, fighting on behalf of their soverign. Owing to this several times a Hoda child ascended the throne of Bundi. Therefore, the role of the royal queen, Diwan and of Dhai ma became very important in royal administrative and political affairs of Bundi.

The City of Bundi thus grew outwards Taragarh hill. A small habitat developed at the foothills of the fort itself. The location of the royal palace was on steep slope overlooking the valley below, providing a view of vast surrounding hinterland. Garh Mahal became the focus and an imposing landmark on skyline of Bundi was visible from the valley below. In the next 200 years the entire cluster was built. Garh Mahal was reassuring sight for the residents of Bundi during turbulent times and Taragarh on top of the hill stood as guardian of the city. External use of colour on external façade of houses imparted a unique radiance and vibrancy to streets of Bundi, rarely witnessed anywhere else in India, except in Jodhpur. Most houses in Bundi have Jharokhas with some screens on upper floors opening on to street, providing light and ventilation. Apart from enabling movement and connectivity, these streets also performed the important role as facades of settlement fabric of walled city.

Darwajas in Bundi can be classified as: -

a) Entrance gateways of Taragarh, the oldest darwajas

b) Four Darwajas of walled city

Best example of medieval Indian city exhibiting water harvesting methods adopted at settlement level as well as finest examples of water architecture. Location of Baoris and Kunds outside the walled city was also influenced by social considerations as ascess to baoris and kunds were located within walled city was controlled.

Bundi was also known as Chotti Kashi owing to presence of over hundred temples within and around the hada capital. Despite being a Vassal State of Mughal empire, Hada rulers not only retained their hindu religious and cultural traditions but escalated their unflinching affiliation to them manifesting it in large number of temples built during four centuries of Hada hegemony. Temples constructed in early phase of Bundi’s growth were is classical Nagara style, while in later phases new temple typologies emerged from amalgamation of architectural form of traditional haveli with the classical Nagara style. Jain temples formed third type of temple type constructed in an introvert form, integrating typical Jain temple features like serpentine Torna gateways at entrance, large cuboid opaque mass and central courtyard with and Nagara style shikars on its garbhagriha. A fourth temple type emerged in the form of raised or elevated temple. Absence of monumentality in their scale is a distinctive feature of temples in Bundi. One of the reasons for this was close relationship. The diversity in temple forms and liberty exercised in this creation departing from classical, established norms is indicative of freedom and involvement of local communities.

Architectural heritage of Bundi can be classified in six typologies: -

Taragarh Fort- Taragarh Fort was constructed by Rao raja Bair Singh in 1354 on a hilltop 1426 feet high. In the centre of the fort is located Bhim Bhurj on which was once mounted a particularly large cannon called Garbh Gunjam, or ‘Thunder from the Womb’. With its curved roofs topping pavilions, excess of temple columns and elephant and lotus motifs, the palace is a tribute to Rajput style. The fort includes Hazari Darwaza, Haathi Pol, Nau Dhaan, Ratan Daulatkhana, Darikhana, Ratan Niawas, Chatra mahal, Badal Mahal & Moti Mahal.

Sukh Mahal- A small, two-storied palace was a summer retreat of past rulers. Located on banks of JaitSagar lake, the palace was constructed by Rao raja Vishnu Singh in 1773 A.D.

Rani Ki Baori- Bundi has more than 50 stepwells and rightly known as city of stepwalls . Raniji ki Baori, also known as ‘Queen’s Stepwell’, is a famous stepwell built in 1699 by Rani Nathavati Ji, the younger queen of the ruling king Rao Raja Anirudh Singh of Bundi. This multi-storied stepwell displays excellent carvings of Gajraj with his trunk turned inwards, giving the impression of having drunk from the baori on its pillars. Its high arched gate gives it an inviting appearance.

84 Pillared Cenotaph- As the name suggests, the 84 Pillared Cenotaph is a structure supported by 84 columns. Commissioned by Rao Anirudh, the Maharaja of Bundi, this cenotaph was constructed in memory of his nurse, Deva, under whose love and guidance the prince grew up. A popular tourist attraction, this impressive structure is decorated with carvings of deer, elephants and apsaras.

Travellers have good number of places to explore in Bundi with good number of budget hotels. Vegetarians can enjoy Dal Bhati and various types of spicey chutneys.

Summing up the webinar Rupinder Brar , Additional Director General stressed on the importance of travel and explore destinations, cuisines, culture and heritage. Ministry of Tourism’s Incredible India Tourist facilitator certification programme act as an enabler for transforming a local citizen with no specified skills having proficiency in a regional language into a potential bread earner for their households. This will further help citizens to own up the local heritage, folklore and culture and show it to the visitors.

She also stressed on the importance of respecting the norms during this pandemic like wearing mask, washing hands and maintaining social distancing.

Dekho Apna Desh Webinar Series is an effort to showcase India’s rich diversity under Ek Bharat Shreshtha Bharat. The Series is presented in technical partnership with National e Governance Department, Ministry of Electronics and Information Technology. The Sessions of Webinar are now available on the https://www.youtube.com/channel/UCbzIbBmMvtvH7d6Zo_ZEHDA/featured and also on all social media Handles of Ministry of Tourism, Government of India.