“The vision of Dhariwal will change the face of Kota city" 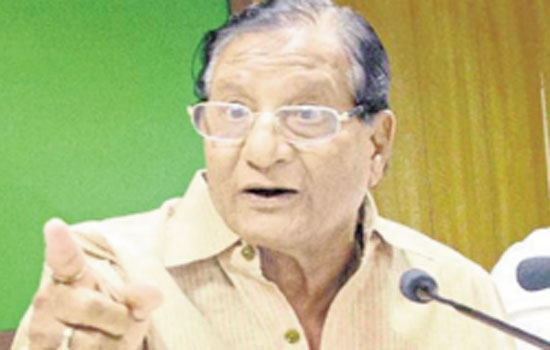 The coming two-three years are going to prove crucial for the development of Kota city. The present form of the town will change itself. New structures of development will add a new color to the city's Ginza. From the point of view of a person, the appearance will be such that no one has ever imagined it. Yes! I am discussing that person Shanti Kumar Dhariwal, who is focused with all his strength to make Kota city alluring. The Kota North Legislative Assembly voters got Dhariwal won in the Assembly election and sent him to the assembly. His experiences and Qualifications with significant works made him the head of the government's autonomous government and urban development department. On becoming a minister, he laid out a blueprint for developing the entire city without political discrimination and his vision of making the wards the ideal wards. He has also taken suggestions from the people for the aggradation in the development of the city. To materialize vision, plans were started on the ground, and as a result of this, the completion of many CC Roads' construction has started benefiting the public. The work of many roads is still progressing fast. There are floods of development works in the city all around. Flyovers and underpasses are being made at the intersections. Fast work is being done to complete the old incomplete works soon.The important Chambal River Front project for Rs 700 crore and the work of Oxygen City Park Scheme has also started on the land of IL from Rs. 80 crore. Oxygen Park is being developed by the urban Development Trust on 86 acres of instrumentation limited land to give a new direction and condition to the environment in Kota. Honoring the demands and public sentiments being raised by citizens, environment lovers, various institutions, and media for a long time, they took it on the priority of their quota development agenda. Both of these projects will be so beautiful and inspiring that tourists from the country and the world will come to Kota to see them.Aportal will be created so that the country and the world can get information about these works at home. They are planting five thousand more oxygen-rich plants, developing Botanical Garden withflowersofdifferent200species,auniquecolony fornationalbirdpeacock,andexpandinganUnderground Birds Zone of 150 exotic species of birds, on both sides of the entrance road. It will be made beautiful by Flower Valley's works, Glass House on the banks of Center Lake, a beautiful kinetic tower changing the design, boating facility in the middle of the lake.Along with these features, there will be space for grass and trees on Art Hill and music and art concerts in seven blocks below. Both the road cycle track and at the end of the road Statue of youth studying,facilities for WiFi Zone, Coffee Zone, Modern Science Museum, Health Zone, Yoga, Meditation, Open Gym, and Open Theater, etc. will also be developed. The development of Oxygen surrounding areasIt has been estimated to have an environmental impact. The construction work of this modern Oxygen will be divided into 40 zones. Locals will get entry through a card and tickets for tourists. From the point of view of environment and tourism development, this will be a big gift to the Kota residents of Dhariwal.Development of Devnarayan colony in Kota from 150 crores, four Parking development from 104 crores, construction of 3 underpasses from 100 crores, construction of flyovers in Gumanpura from 80 crores, construction of two other flyovers from 80 crores and 40 crores in MBS Construction work of OPD has been approved in the first year itself. So far, development projects worth Rs 1134 crore have been started. These works are being done by the Urban Development Trust the residents will get rid of the traffic problem and traffic. The city infrastructure will be strengthened, the beautification will be done and the way of development of tourism will be paved.