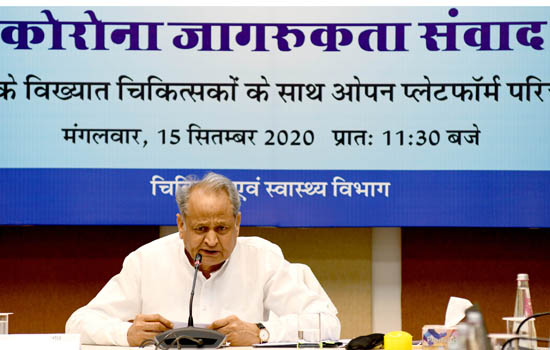 New Delhi The increasing corona infection can be completely controlled if every person takes corona pandemic seriously and mandatorily wears a mask, maintains social distancing and fully abides by the health protocol. There is a need to give awareness towards corona a form of social movement.

This was a prominent outcome of the open platform discussion 'Dialogue on Corona Awareness' of expert doctors with the people of Rajasthan up to the panchayat level through a video conference from the Chief Minister’s residence on Tuesday. The event was telecast live through more than 8,000 e-mitra plus centres and webcast along with the broadcast through regional TV channels, social media platforms like Facebook, YouTube etc.

Lakhs of people joined the event from the state and other parts of the country. State Cabinet Members, MPs, MLAs, Administrative and Police Officers of the state government, Principals of Medical Colleges, CMHOs, PMOs and Doctors, public representatives at the level of gram panchayat and government employees witnessed and participated in this novel live discussion.

Rule of ‘No Mask-No Entry’ Should Be Made

Dr. SK Sarin said that the rule of ‘No Mask-No Entry’ should be strictly implemented at all the public places, including the government and private institutions, banks, markets areas etc. Then only the efforts of the government to contain spread of corona infection would be fruitful. Everybody should understand that self-protection is the only treatment of corona and we will succeed in winning this battle only by strictly abiding by it. People should wear masks and should see those wearing masks with respect, he added.

Corona Warriors Should Be Respected

The medical experts opined that the doctors, nurses, paramedical staff, police personnel etc., all those who are playing an important role in the battle against corona should be respected in the society. Patients tested positive should also be seen with respect, the doctors said, further adding that those good infected must have saved others from getting infected by testing themselves on time.

Dr. Naresh Trehan said that the role models of different sections of the society and the persons having influence in public life should set examples by wearing masks and fully following the social distancing norms. He said that, so far, the government of Rajasthan has done efficient work in fighting the corona pandemic. General public should also join the efforts being made by the state government to ensure that all precautions are very well taken and followed to win the fight against corona.

Dr. Devi Shetty said that by now, the country and the world have learnt a lot on how to manage and prevent corona virus spread. He said that Rajasthan gave a famous ‘Bhilwara Model’. He said that corona pandemic was not going to end soon and the fight against this virus would be fought for a longer time. Thus, in such a situation, people have to be very cautious. The indifferent or careless attitude towards safety precautions could cost heavy, he added. He suggested the public to avoid crowds in any given situation and said that delay in diagnostic test or treatment could prove fatal.

Every Person Should Take Special Caution

During the event, Chief Minister Shri Ashok Gehlot said, “It is our duty to save every life.” The state government is taking all possible measures to prevent spread of corona infection. He said that more than 100 video conferences have been held since March. The health infrastructure has been strengthened across the state and the testing capacity is being continuously increased. Adequate arrangements have been made for oxygen beds, ICU beds and ventilators. Focus is on bringing the rate of deaths due to corona at the lowest level and increase the recovery rate as much as possible. He hoped that the suggestions made by the expert doctors during in the discussion will have an impact on the general public and people will take all special precautions to control this epidemic.

Medical & Health Minister Dr. Raghu Sharma said that during past few months testing facilities have been installed in 22 districts of Rajasthan and labs are being set-up in rest of the districts as well. He said that efforts made by the government to control the corona under the leadership of Chief Minister Shri Ashok Gehlot were being appreciated all across the country. Minister of State for Medical & Health Dr. Subhash Garg said, “Our fight against corona will be successful only when every citizen gets aware and protects himself from this infection of corona virus.”