Education builds wisdom but it is necessary to imbibe it - Prof. Mishra 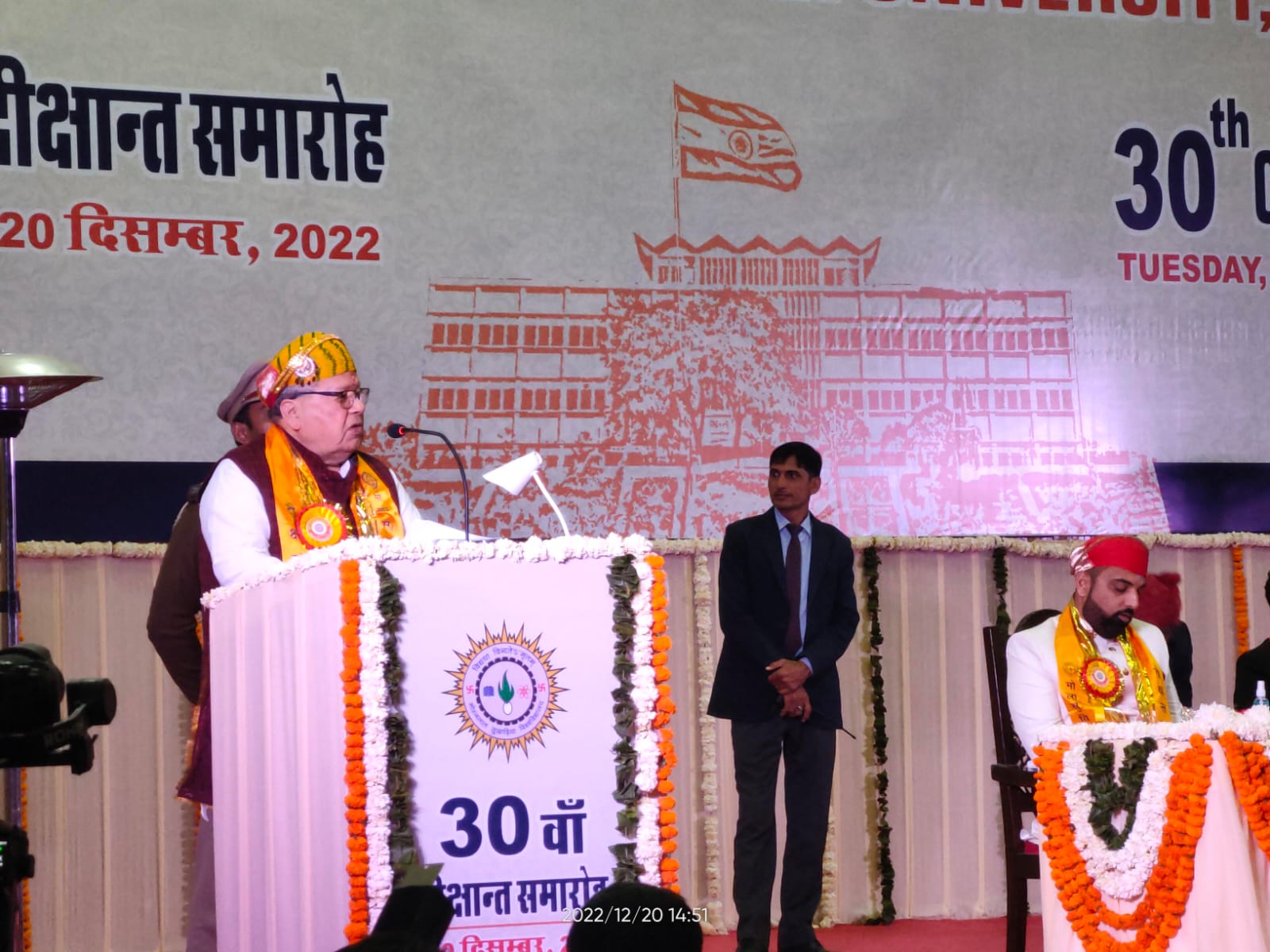 The convocation ceremony began with the academic procession of all Dean Directors and Heads of Departments under the leadership of Chancellor and Governor Kalraj Mishra. After this, gold medals and degrees were distributed in the auditorium. On this occasion, Indian Paralympian Devendra Jhajharia, who won a gold medal in athletics, and Lakshyaraj Singh Mewar, a former royal family member, who did pioneering work in social service, were awarded the honorary degree of D.Litt.
Chancellor and Governor Kalraj Mishra said that universities should become the place of innovations in education. He said that in today's era, there is a need to bring innovation in education so that enthusiasm can be awakened in the students towards the subject being taught and students can feel the transmission of new consciousness while studying.
He said that the culture of personality should be the core of education through knowledge, science, and philosophy. The Governor noted that information and knowledge are essential but make a person more mechanical. Intellectually rich knowledge will not be of importance until it is transmitted sensitively. He said that it is my expectation from the teachers of the universities that they should go to the heart of what they study. First, imbibe in yourself, then share your knowledge with the students. The Governor said that in this era of science and technology, maximum use of information technology has to be made. We have to prepare such educational models which fulfill the priorities of the new education policy and are communicated to a maximum number of people.
The chief speaker of the convocation, Professor Girishwar Mishra, former Vice-Chancellor of Mahatma Gandhi International Hindi University, Wardha, gave his address on the topic 'Culture of Knowledge. He said that learning is not a neutral acquisition of knowledge but also its assimilation because learning creates wisdom. Teachers should fulfill their role in which new thinking is born by mixing digital and traditional mediums. He said that universities are centers of knowledge creation. This surgeon is in the middle of society's culture, and there is a reciprocal relationship between community and education. Man's life journey is completed only under knowledge. Knowledge is the most sacred thing on this earth. Giving the example of Shrimad Bhagwat Geeta, he said that apart from the elements of the body, the speech also has penance. Deserved respect is received only by restraint of speech. All this is achieved through education only. He said that talks on values can be applicable only in an idea-oriented society. For this, priority must be given to knowledge in society. Professor Mishra said that Vidya Kendra is a bridge between home and society. It is the place of life where understanding the right path, depth, and realization of its purity is possible. Light and wisdom can rise from the campus of the university itself.
Paralympic winner Devendra Jhajharia, who received the honorary degree of D.Litt, said that the result of hard work never comes immediately. That requires a lot of patience. That's why the youth should set their goal and focus on them; then, success will be inevitable. Lakshyaraj Singh Mewar, a member of the former royal family of Mewar, who received an honorary degree of D.Litt, said that in Udaipur, it is a matter of pride for him to have his own respect at home. He said that it is not mine but the respect of every youth associated with social service.
Girl students topped in degree and gold medals - 88 gold medals were given in the convocation, in which 66 girls and 16 boys were included. In this, 82 students attended themselves and received their gold medals. Similarly, 6 girl students and 2 boys were included in 8 Chancellor Gold Medals. 11 sponsor medals were awarded, including Prof. Lalit Shankar Pushpa Devi Sharma Sponsor Gold Medal, Mehta Jagannath Singh Memorial Gold Medal, Dr. C B Momoria Memorial Gold Medal, Prof. Vijay Shrimali Memorial Gold Medal, PC Ranka Gold Medal, and Prof. RK Srivastava Memorial Award and Vijay Singh Devpura Memorial Awards were presented. Similarly, 187 Ph.D. degrees were awarded in various faculties. There were 100 girl students and 72 male students. Of this, 36 in the Faculty of Science, 12 in the Faculty of Commerce, 34 in the Faculty of Social Science, 12 in the Faculty of Earth Science, 11 in the Faculty of Management Studies, 40 in the Faculty of Humanities, 6 in Faculty of Law and Faculty of Education 21 students were awarded a Ph.D. degree. In this, 172 students attended themselves and got their degrees.
At the beginning of the convocation, Vice-Chancellor Professor IV Trivedi welcomed all the guests and informed them about the year-long activities and achievements of the university.
Registrar Chhogaram Devasi conducted the entire proceedings of the convocation. At the beginning of the program, Yashodanandan Kumawat of Nathdwara Gharana played Pakhawaj.
After the convocation, Governor Mishra inaugurated the new building of the College of Architecture. He also laid the foundation of the Institute of Engineering's workshop, laboratory, and sports academy building.