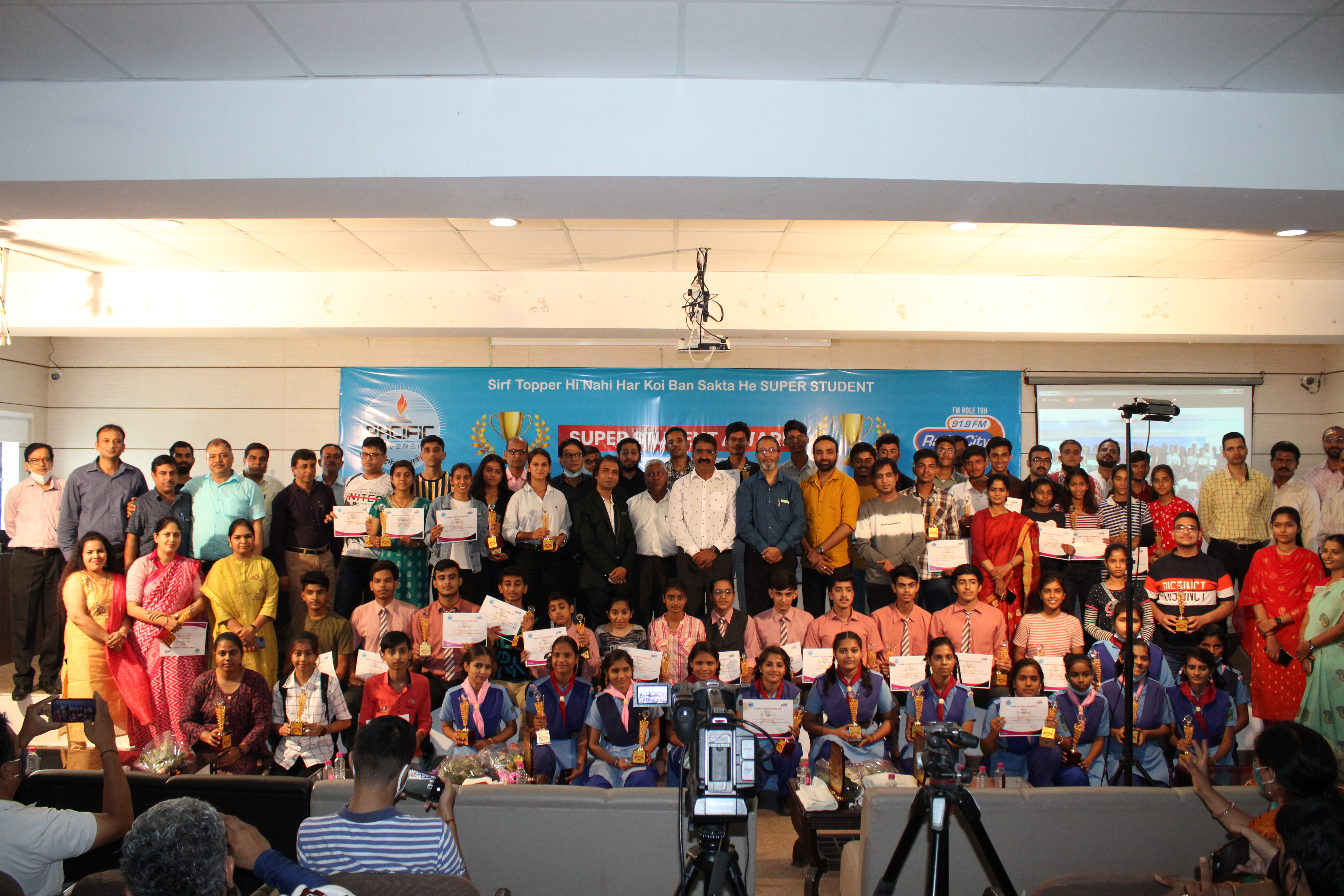 Udaipur: Winning book education is as important in life as much as other activities, but the present education is reducing the opportunities for the overall personality development and talent development of the children. Unnecessary pressure on children to be top in studies is created by parents, due to which they are not able to bring their real talent in front of people, while the new education policy emphasizes on giving education according to the taste of children, this idea byPacific University appeared in the Super Student Award Ceremony organized. In the Super Student Award Season Third Award Ceremony held at the Pacific University campus, the top students and their mentors and coaches were honored in education as well as other activities from across the division. DirectorTraining andPlacement andProgram Coordinator at Pacific University, Dr. Shankar Chaudhary said that more than450childrenfromacross thedivisionappliedfortheSuper StudentAward,inwhich200studentswere,selectedwhoscored more than 60 percent marks in class 10th and 12th. A platform to honor students who have participated and secured high positions or have been part of any other competition on other activities like sports, music, dance, drawing, painting, a quiz at the district level, state-level, or national level. to be provided. The awards were divided into four categories like sports, cultural, various other activities. Most applications came in the sports category, which includes main cricket, hockey, swimming, skating, shooting, netball, many applications were also received in other categories, after selecting the best of all, they were given trophies and certificates as an honor. Pacific University President Prof. Dave said that Pacific University has been striving to bring forth talented students from the very beginning; with this objective, the Super Student Award was started. The new education policy also supports education according to the interests of the children. Following theCoronaguidelines,inthis thirdseason,thestudents showed maximum enthusiasm and got the maximum number of entries. The chief guests of the program were Divisional Education Officer Omprakash Ameta, District Education Officer of Directorate of Secondary Education Mukesh Paliwal, Lyricist and Choreographer ShriAtharv Joshi, Choreographer Rajesh Sharma, Sports Authority of India, and Chief Coach of Swimming Dilip Singh Chauhan. Appreciating the efforts of Pacific University,Ameta said that as talented children are left behind due to lack of platform and encouragement, the Super StudentAward program will work to infuse new enthusiasm in them. All the Deans and Directors of the University were present in the program. The program was conducted by Dr. Subhash Sharma and the vote of thanks was given by Dr. Jogendra Singh Khangrot, the convener of the program and director of the College of Physical Education.

यह खबर निम्न श्रेणियों पर भी है: Education
Your Comments ! Share Your Openion
More News for You !
- Special Training Program on Mental ...
- MLSU: Retired employees will get th...
- Mark the celebration of the foundin...
- Prof.S.S. Sarangdevot honored with ...
- Pacific University receives Educati...
- Pacific University honored super st...
- Completion of training on a clean a...
- Chancellors and educationists of th...
- The priority of the university is t...
- Three students of Aakash Institute ...
- Playing a leading role in skill enh...
- Broad and clear powers to screenwri...