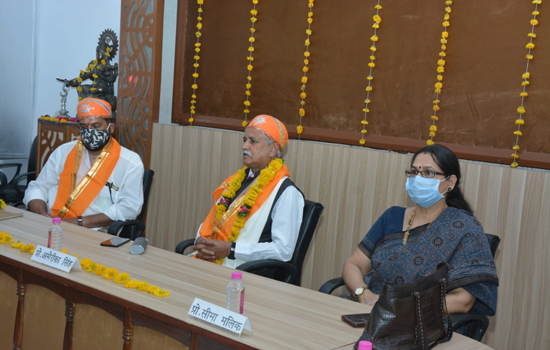 Udaipur: The Jallianwala Bagh massacre was the most barbaric act of British rule. These tales of repression of the British and the sacrifice of the innocent still make the story stand up. These views were expressed by Prof. Chandrashekhar Sharma of Meera Kanya Mahavidyalaya as the keynote speaker at a classy border event organized by the U.C.S.S.H. Dialogue Series Jallianwala Bagh Massacre organized by the College of Social Sciences and Humanities of Mohanlal Sukhadia University Udaipur. In a program organized under the chairmanship of Vice- Chancellor Prof. Amarika Singh, Professor Sharma said that the genocide of Jalianwala Bagh on 13 April 1919 was the cruelty of General Dyer. One of his decisions killed thousands of people. The British rule also gave a clean chit to Dyer, calling this decision correct. This incident was a conspiracy to weaken the independence movement and break Hindu Muslim unity. He said that proved to be a turning point of the national movement. The Jallianwala scandal is like that of a Knight Mayor, with villains O Dyer and MR Dyer. It would be wise to call Dyer the Ahmad Shah Abdali of modern India. The Jallianwala carnage resulted from Dyer's bloodshed, his colonial zealotry thinking that Indians should be made a creeping worm, and broke their morale so that they could bear the British oppression. For this reason, the Rowlatt Act, which was called the Black Act, first misused Satpal Arya and Saifuddin Kichlu in Amritsar and roasted about 2 thousand people with 1650 rounds of bullets. There was a game of hiding the death toll in the British Commissions and Inquiry Committees. O Dyer, avenging this massacre, had O Dyer go to London to be an orphaned 21- year-old Udham Singh, who worked as a chef after 20 years of work, shot Dyer in London in 1940 and was sentenced to death, Indian national pride. The Jaliwala incident is tragic, but it remains classical in the national image; only then the Mangadh of 1913 is c a l l e d J a l l i a nwa l a o f Rajasthan. Vice-Chancellor Singh said that our history has been proud. The knowledge of historical fact reaches the new generation suitable form such ceremony. Efforts are constantly being made in this direction from Sukhadaia University. He said that the topic of discussion had been selected with similar intentions. Mangadh of Vagad is also Jaliwala Bagh ... Earlier welcoming the guests, the program convenor Prof Seema Malik compared the Jallia Wala Bagh massacre to Mangarh Dham of Wagad, saying that both incidents happened during the British rule, and thousands of innocent people were killed. She said that thousands of people sacrificed their lives during the country's freedom struggle. We have to understand the meaning of freedom. The seminar room will be in the name of martyr Udham Singh. The Vice-Chancellor inaugurated the seminar hall on the university campus. During this time, the Vice-Chancellor announced the building's name in the name of Shahid Udham Singh. Honoring the winning students - The Dindi Yatra, organized by the university, was a step towards independence; the essay subjects were also awarded in the competition. The first semester was awarded to the University Science College. First Prize Rs 1500 Shivani Bohra MSc Botany First Semester, Second Prize Rs 1200 Cash and Certificate of Law College, B.A.L.L.B. The third-semester student was given to Ms. Harshi Verma. Third Prize Rs. 1000 Cash Ms. Lata Noor, MA Economics First Semester And Mr. Shaitan Singh Vishnoi, Department of Education, Mohanlal Sukhadia University. Two Consolation Awards Ms. Kashish Khatik, B.A. Honors First-Year And College of Humanities and Megha Gehlot, B.Sc. Secondyear, awarded to Seth Ma th u r a d a s Bi n a n i Go v e r nme n t Co l l e g e , Nathdwara. DSW Prof. Puranmal Yadav, Convenor of Anandam Prof. Neeraj Sharma, Co- Coordinator Jinendra Jain, Dr. Shukla, Prof. Kalpana Jain, Dr. Meenakshi Jain, Dr. Suresh Salvi, Dr. Dolly Mogra, Dr. Vijaya Dixit, etc. were present. Dr. Neha Paliwal, co-ordinator of the Col lege of Operations, convened the Program, and the vote of thanks was given to the proctor of the college Dr. PS. Rajput, The winning students of the Jallianwala massacre topic essay competition, were honored at the ceremony.