Judiciary moves ahead for not using single use plastic 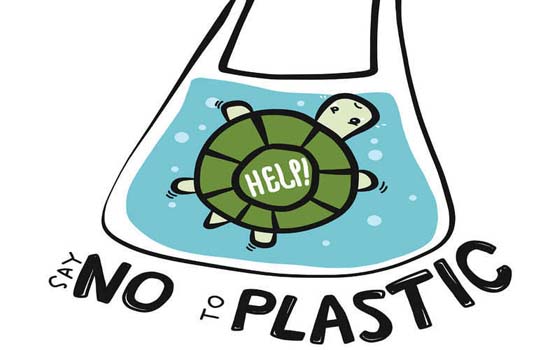 (Hritu sodhi) The new court complex at Chittorgarh district in Rajasthan was inaugurated on Sunday. No doubt this shall be remembered as a historic and memorable day due to the magnificent presence of two honourable Justices of supreme court, Justice Dinesh Maheshwari and JusticeS. RavindraBhatt along with Chief justice of Rajasthan High court Justice indrajit Mohanty and two honorable Judges of Rajasthan High court, Justice Mohammed Rafiq and Dr. JusticePushpendraSinghBhati. However one remarkable change was also be seen in the inaugural function that single use plastic was completely avoided here. Ordinarily in such functions use of plastic bottlesandplates,glasses, spoonswasprevalent in the past, however during this function no plastic bottles were seen at the the dias for the dignitaries. Water was served in the glasses, food served in the plates made of ceramic.Inordertoaccomplishthetask,severalmeetings were held in past between the various departments bar association and the judicial officers under the directions of District and Session Judge, Chittorgarh, Hemant Jain. Honourable inspecting Judge Dr. Justice Pushpendra Singh Bhati had also visited the campus to examine the preparations and the progress.Oncoupleofoccasions, clearinstructions were given to avoid the use of single use plastic in the function of new court complex. TheDistrictandSessionJudgeChittorgarh, Hemant Jain along with the entire judgeship including the judicial officers and employees of the district court had taken a pledge to not tousethesingleuseplastic infuture.Theongoing campaign and awareness programmes in order to create awareness against the use of singleuseplasticindailylife,rally,camps,nukkad natakswerealsoheldinChittorgarhonGandhi jayanti. Shri Jain insisted that now in continuation of the same, no single use plastic should be used while organising any function in Chittorgarh in near future.District legal service authority, Chittorgarh District arranged traditional earthen kulhads and ceramic cups for drinkingwater,teaandforotherpurposesceramic plates, steel plates, spoons and other utensils were used forlunch forthe dignitaries, judicial officers, lawyers and guests from the various government authorities and departments. In the function most of the decoration of the main porch and entrance gate were done with beautiful natural marigold and rose flower petalsandnatural leavesandplants.Mainstage was decorated with the marigold flowers. Rangoli in the main porch entrance and in front of the District Judges Court was also made of natural flowers and colours. The judiciary had given a message to the public against the single use plastic and set an example that such a mega event can be organised without the use of single use plastic and further inspired the public to remove plastic from their life and to address the public outcry to save the planet from the hazards of single use plastic.