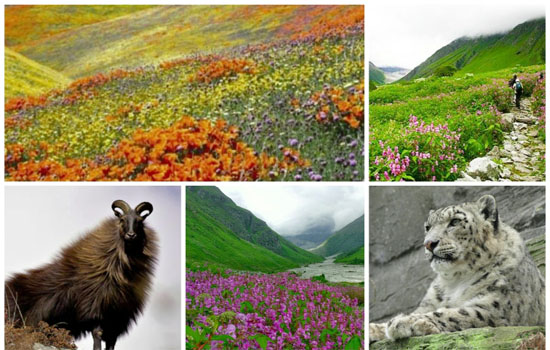 The Valley of Flowers National Park, with its gentler landscape, breath-taking beautiful meadows of alpine flowers and ease of access, complements the rugged, inaccessible, high mountain wilderness of Nanda Devi.
The Valley of Flowers is internationally important on account of its diverse alpine flora, representative of the West Himalaya biogeography zone.  The National Parks are exceptionally beautiful high-altitude West Himalayan landscapes with outstanding biodiversity.
This richly diverse area is also home to rare and endangered animals, including the Asiatic black bear, snow leopard, brown bear and blue sheep. Nanda Devi National Park is home to a wide variety of flora. Some 312 floral species that include 17 rare species have been found here. Fir, birch,
rhododendron and juniper are the main flora.
This park was declared as world heritage by UNESCO in the year1988. It was later expanded and renamed as Nanda Devi and Valley of Flowers National Parks in 2005. The Nanda Devi National Park or Nanda Devi Biosphere Reserve, established in 1982 is a national park situated around the peak of Nanda Devi 7816 mt. in Chamoli Garhwal district of Uttarakhand, in northern India.
The area of park is 630.33 sq.km and the entire park lies at an elevation of more than 3,500 mt. above mean sea level. This entire area, located within the Western Himalayas Endemic Bird Area (EBA), supports significant populations of mountain ungulates and galliformes that are prey to carnivores such as the snow leopard.
One of the most spectacular wilderness areas in the Himalayas, Nanda Devi National Park is dominated by the 7,817 m peak of Nanda Devi, India’s second highest mountain which is approached through the Rishi Ganga gorge, one of the deepest in the world. The Nanda Devi National Park, with its wide range of high altitude habitats, holds significant populations of flora and fauna including a number of threatened mammals, notably snow leopard and Himalayan musk deer, as well as a large population of bharal, or blue sheep. The rich diversity of species reflects the valley’s location within a transition zone between the Zanskar and Great Himalaya ranges to the north and south, respectively, and between the Eastern and Western Himalaya flora.
A number of plant species are globally threatened, several have not been recorded from elsewhere in Uttarakhand and two have not been recorded in Nanda Devi National Park. The diversity of threatened species of medicinal plants is higher than has been recorded in other Indian Himalayan protected areas. The entire Nanda Devi Biosphere Reserve lies within the Western Himalayas Endemic Bird Area (EBA). Seven restricted-range bird species are endemic to this part of the EBA.
The Nanda Devi and Valley of Flowers National Parks are naturally well protected due to their remoteness and limited access. Both the parks were unexplored until the 1930s and have not been subjected to anthropogenic pressures since 1983 with the exception of some well regulated community-based ecotourism to small portions of the parks. The local communities residing in the buffer zones of the Nanda Devi Biosphere Reserve actively participate in the conservation programmes of the Forest Department.
The first British climber Frank S Smith and his partner R. Ale.  Holdsworth in 1931 when he was returning from his expedition to Mount Kamet. Smith was so impressed by its beauty that he returned to this valley in 1937 and wrote a book called "Valley of Flowers" which he got published in 1938. Tourists enjoy a lot of trekking while enjoying the magical sight of different varieties of flowers adorning the valley.
For those who love nature and flowers and are interested in gardening, about 500 types of flowers are found here. Along with flowers, 250 species of birds and 70 species of butterflies and other animals are found here.
The months of May and June are the most favorable time of the year to visit Nanda Devi National Sanctuary. The nearest airport is Jolly Grant located at Dehradun at a distance of 295 kms. There are regular flights from Delhi to here. Haridwar nearest railway station is 202 kms. It is also connected by road to all the major places.