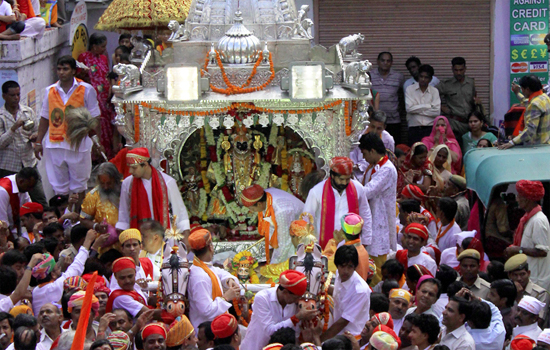 About the people of Mewar, it has been rightly said that they have “saat vaar aur ndu tauhar” which means that they are seven days in a week but nine festivals to celebrate. They are always so busy celebrating festivals that hardly do the din of one dies, preparation is afoot for celebrating the next one. One such festival is the Jagannath Rath Yatra that falls on ‘Ashad Shukla Dwitiya’ and the third biggest in India after Jagannath Puri in Orissa and Ahmedabad in Gujarat.
Related to the Yatra are some fascinating rituals. The idol of Bhagwan Jagannath, who is worshipped as a living being, is bathed every day. However, on ‘Jestha Shukla Purnima’ he is bathed with the water of 108 pitchers. He is also offered mango juice in big quantity. No wonder, he gets sick. To keep him warm, he is shifted from his “Singhasan” to a resting place in the same room. During the next fortnight, he is given “Kada” by the priests and is looked after by his sister Subhadra, elder brother ‘Balbhadra’ and ‘Sudharshan Chakra’. He gets only fruits to eat.
In Jagdeesh Mandir, on Purnima, the idol is bathed with ‘Panchamrit’ with the recitation of spiritual texts. He is given ‘bhog’ that keeps him warm. Devotees can have his ‘darshan’
At the time of ‘Pranpratishta of Jagdeesh Mandir’ by Maharana JagatSingh Over 365 years ago, the Yatra was confined to the premises of the temple and the idol was taken around the temple only. The Maharana himself pulled the chariot.
Seated in the traditional Rath, Lalan and Radha Krishna took four rounds of the temple but they rested at ‘Surya Devari’ were idols of Surya were worshiped and offered fruits. When the state of Mewar was merged with greater Rajasthan, there were difficulties in the Yatra as earlier it took place in the presence of the erstwhile ruler. After the passing away of Maharana Bhopal Singh, efforts were made to revive it.
Over time, as a large number of devotees wanted to have Darshan, the place became crowded so the priests decided to take the Rath out. For a few years, the Rath was placed on a camel cart and taken around the city.
In the beginning, there were 600 devotees and a small number of ‘Jhankis’ in the Yatra. However, the number of both has gone up multifold.
Preparations for the big event are started well in advance. For wide publicity are prepared stickers, hoardings, leaflets, etc. Social media is also used and rallies are taken out. Priests of all the sects are invited to participate. The streets through which the procession passes are spruced up and decked with buntings and small flags of various sizes and colors. All this gives the town a festive Jook.
Cleaning and beautification of the Rath start days in advance by a team of specialists. The silver-white chariot that has wooden horses is painted with colors and oil. A couple of days before the Yatra, the ‘Rath’ is brought to Jagdeesh Chowk in parts after the evening ‘Arti’. Before this ‘Ganga Jal’ is sprinkled on the floor and Ganesh idol is set up there.
Now another “Rath” made by Med Swarnkar Samaj that weighs about 300 kg and has a silver covering of 21 kg on wood has become a part of the ‘Yatra’. It has a dome, ‘Singhasan’, ‘kalash’, and ‘idols’ of horses.
Before the start of the ‘Yatra’, there is ‘Kirtan’. In the afternoon, the idols of the Lord are decorated beautifully and brought down by the chief priest to the chowk were eagerly waiting devotees welcome it shouting. “Jagannath Swami ki Jai”, “Hathi Ghoda Palki, Jai Kanhaiyalal ki”. Vishavaraj Singh Mewar of the royal family draws the Rath and then barefoot devotees in Mewari dresses pull it. Anyone of any community can do so. A thirty-one gun salute is given. The “Bhagwan Jagannath Rath Yatra Samiti” was formed to celebrate the Yatra on a grand scale befitting the occasion and sanctity of the splendid temple makes efforts to involve people in large numbers in this festival, selects the ‘Jhankis’ that participate in it and ensures that the Yatra takes place smoothly. It lays down rules that help in proper management. Animals like horses, camels, and elephants are now not a part of the procession for safety. The tableaus have idols of only gods and goddesses. Only religious songs and “Bhajans’ are sung. The time schedule of the Yatra is decided by the “Samiti’.
It seems that the whole town is out on the streets and men dressed in Mewari clothes and “Pagri’ and gaily attired women welcome the idol by showering flower petals or Gulal and performing ‘Aarti’ at several places on the route. The Yatra that has bands, dhols, akharas, etc are also watched from housetops, windows, and stairs of houses. Cold drinks and snacks are offered to the devotees by several Samaj at different points of the route.
A procession of idols of Jagannath, sister Subhadhra, brother “Balbhadra and Sudar ,Mar Gnokra made of Mahadaru wood riding Nandghosh “rath” starts in the morning from Jagannath dham, ‘Hiran Magri’ Sector 7. It joins the main procession at Jagdish Chowk and becomes part of it. Later on near ‘Santoshimata Mandir’ inside Delhi gate, it changes its route and goes to Bapu Bazar were a  Maha-arti with thousands of ‘diyas’ is waved.
Wending its way through different parts of the town the procession returns to Jagdeesh Mandir just before midnight when the final arti is waved and the idol of the lord returns to the main temple.
Fired by religious fervor the whole town seems to be agog with excitement to become a part of the procession. Not only local devotees but also those from distant places and even some foreign tourists join in and have a memorable experience.
A special feature of the Yatra is that it brings together not only different sects of the Hindus but also Muslims and Sikhs who come Forward willing to offer seva.