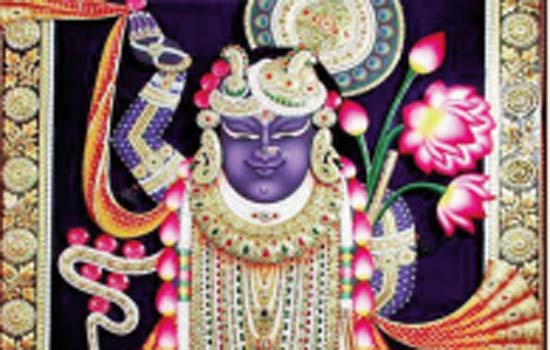 Locatedabout50kmnorthofUdaipuris thehighly revered Shrinathji Mandir, Nathdwara, the main Peeth of the Vallabh Sampradaya. Lacs of devotees throngs it from far and near throughout the year. The Lord decided to leave his original abode in Mathura in UP due to Mughal rulers' atrocities. As desired by the Lord, his chief devotee Gosain Damodarji, left Mathura carrying His idol in a Chariot. The party arrived at Nathdwara after traveling to and staying at several places in the country in a Chariot on 10th October 1668. The party stayed in Agra for 16 days and then left the place on 26th October. After the next halt at Krishnapura, they arrived in Kota, where the stay was for four months. They were warmly welcomed by Raja Mansingh when they reachedKishangarh nearAjmer after a two-month-long journey. However, due to the fear of Badshah Alamgeer, the Raja was not able to host them for a long time. So the party left the town and reached Chopasni, near Jodhpur; it was not safetostay there.SoGovindji,uncleofGosainDamodarji, wenttoUdaipurandmetMaharanaRajSingh.Highlydelighted to learn that the Lord desired to make Mewar His home, the Maharana told Govindji that his one lac soldiers would always be in the service of the Lord. Hearings this message, Gosainji’s joy knew no bound. WhentheLord’s chariotreachedGhanerao,theMaharana received it with all his paraphernalia of Rajas, Maharajas, Sardars, etc. The Maharana was there with his army riding horses, elephants, and camels. When the chariot of the Lord came in front of the Maharana, a twenty-one cannon salute was given. He sat on the ground to pay respect and offered one thousand gold Mohurs. There was a lot of singing and dancing. The Lord rested at Ghanerao Chouraha. On his arrival at Rajsamand, the Lord was welcomed warmly.When the chariot reached a place called Singhad, its wheels got stuck in the soil and, despite all-out efforts, did not even budge. Taking it to be the Lord’s wish to make this place His abode, the Maharana asked Delwara Naresh to make all the arrangements, and soon a small temple was built. All thesurroundinglandwasgiventothetemple.On20thFebruary 1672 A.D., the idol of the Lord was installed in the temple. By order of the Maharana, there were grand celebrations throughout Mewar in which the public participated with great enthusiasm. The building of the Shrinath Mandir is unique in the sense that i t h a s b e e n designed as a house.InPushthi Marg, the child fo r m o f L o r d Krishna performing Baal-Leela is worshiped. The ‘Leelas’wereperformed mainly in Brij within the h o m e o f Nandbabaas the main center, so the Mandir is like Nand Bhawan or Nandalaya. The roof of the main Mandir is made of ‘Khaprel’. Being the residence of Lord Krishna, there are Kalash Sudarshan Chakra and Saptdhwaja in the main building. Every day Sudarshan Chakra is bathed with the choicest ‘Itra’ scent and offered ‘bhog.' Nobody can touch it, and through constant vigil, it is ensured that birds do not sit on it. It is the only Mandir ofVallabhSampradaya where ‘dhwaja’ is set up.The Mandiris surrounded by aParkota.Entering through any of the three gates, one reaches Ratan Chowk that leads to Dol Tibari from where one can have ‘darshan’ of the Lord. The Lord's pose with the raised left hand is the one in which He lifted Goverdhan Parwat. With a closed fist, the left-hand touch the waist. A unique feature of Shrinathji Mandir is that here Shrinath is not worshipped as an idol but asalivingbeing.AsShrinathisworshippedliftingGoverdhan Parvat on His little finger, He is also namedGoverdhannathji. One enters Kamal Chowk through Singh Pol. There is a marble lotus in the Chowk where devotees wait for the 'darshan.' At the time of Mangal Bhog, 'bhajans’ are sung at Hathipol. Pandits do Katha here. Sanjhi is also made in this Chowk. Big festivals like Hindole are held here. In Ratan Chowk on Diwali, Navneet Priyaji sits in Hatdi. In the month of Jeshtha, a wall is built, and water is filled here to make a pool for Navautsava. From here, one can have 'darshan’ofSudarshan Chakra’and Dhwajaji Standing in DolTibari; people have 'darshan’of the Lord.Some ‘Utsav' is also held here. In Khasa Bhandar, the material for cooking is cleaned. Navneet Priyaji’s ‘Prasad’ is stored in Shri Krishna Bhandar. In several places are kept different items asindicatedbytheirnames-Shakghar,Paaanghar,Phoolghar, Doodhghar, Mishrighar, Pedaghar, and Patalghar. From Rasoighar is distributed ‘prasad.' So also pattals that have roti daal bhath, kheer, and different vegetables. Each lowcost ‘pattal’ is enough to feed four persons. In Keertaniya Gali, Keertaniyas sing ‘Bhajans’ in classical ragas in keeping with the time of the day and season. In Manikotha are sung Padas composed by A shtchhap Bhakti poets in different Ragini's with the accompaniment of musical instruments. Such is the ambiance suffused with the religious fervor of not only the temple but of the whole town that the massive number of pilgrims who throng the sacred region findthemselvesdeeply immersedinKrishnaBhakti.(Content courtesy Dr. S.K. Jugnu and Narayanlal Sharma)