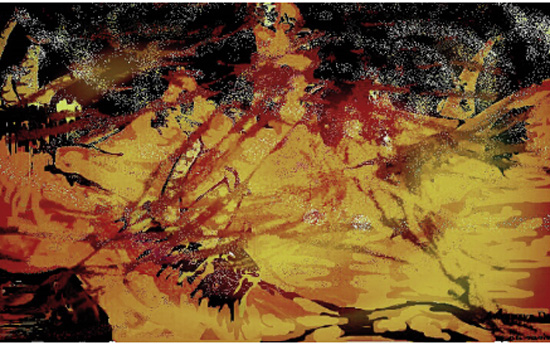 There was nothing to explain in differences. No one showed any willingness to hear any more explanations. There was silence. Pinnacolis became silent too all of a sudden. Storm stopped. Quake ceased. It appeared as if Pinnacolis had broken loose from the surrounding space. Pinnacolians looked around themselves and found a calm Pinnacolis everywhere. And the Neons roared even louder. They kept roaring and whirled up in space. They collided with one another and broke apart in uncountable pieces. Pinnacolians saw the pieces flying away in space. Pinnacolis quaked again after some time and storm started a few moments later. Pinnacolians never found any Neons. They were lost somewhere in the vast space.
“No need to worry anymore....” Notification from Solver reached to Pinnacolians at last. The Message said, “Whatever scratched our mind pots during the days that are gone can be effaced with our Good Fills and all others that our wanderers are going to collect in their future explorations. I've built a sieve to gather strange senses inside any Harming Stroke. Using the sieve, I've found the sense that produced all Neons in our landSelf-dislike, that I cannot define. It is a useless sense and in this vast space there can be many such useless senses that we do not need. From now on, no sense will be emitted unchecked. I've gathered the Horribles and Terribles that stroked in our mind pots. They are unwanted in Pinnacolis and so I'm not storing them in our Hives of Senses. Instead, our Boosters can spread them as food dust. I've checked their strong impulses and they can be extracted as replenishment.”

Like that, land of Pinnacolis saw Pinnacolians to live in it - happily once again.
***

Synopsis:
The fictional story narrates the dark past days of Pinnacolis, a planetary system located somewhere in the universe that left its innocent people victims of several hard feelings completely unknown to them. It is the merciful environment that helped them at last to escape the disaster and live happily again.