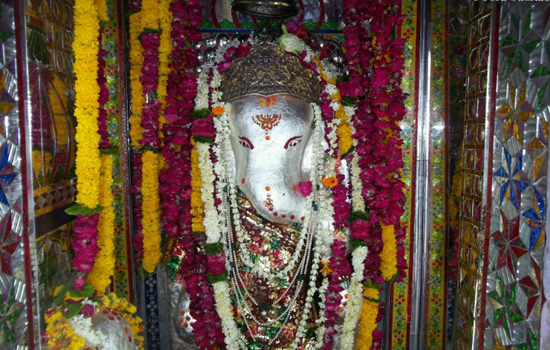 One of the most revered temples in the town like the Moti Dungari Temple of Ganesh in Jaipur, the Bohra Ganesh Mandir is located in Dhoolkot area not far from Govt. Ahad Museum.The origin of the name of the temple is very fascinating. It is said that 70-80 years ago, people who needed money for purposes such as marriage and business would write the requirement on a slip of paper and leave it before the idol. Soon he would get the amount somehow or the other but interest had to be paid. All this continued for a long time but when some persons became dishonest and did not pay the interest in time, this practice stopped. One who lends money is called Bohra. This is how the Lord here came to be known as Bohra Ganesh.

It is said that the temple was originally built by the Joshi family of Udaipur on a platform in the open field. Believed to be over 350-year-old the ‘pucca’ temple was built during the reign of Maharana Rajsingh (1652-80) in the north-east corner outside the city and was called Borganesh. It was completed on Phalgun Shukla Saptami v.s. 1719. One special feature of the temple is that the idol of the Lord is facing east and is in a dancing posture. In the beginning, the Maharana gave gold to a goldsmith who made ornaments in attractive designs which were then offered to the Lord with great reverence.

According to Joshi priests of the temple, Sindoor paste was put on the idol in the past and then it was covered with Malipanna. Layer after layer of this material made the idol very thick. When efforts were made to remove the extra layers, there was a miracle and all the layers fell off automatically. Since then, ‘ghee’, ‘itra’ and ‘golden vark’ are being used.

A large number of devotees visit the place every day. For some of them, ‘darshan’ is a must before they do anything else in the morning. On Wednesday, the day dedicated to the Lord, the number of visitors shoots up. Elaborate rituals are performed every day by the Joshi family that also manages the other matters of the temple by turn.

It has become a custom in Udaipur to begin every auspicious celebration like weddings, ‘grihpravesh’, ‘mundan’, etc in the family by taking the invitation card first of all to the Lord’s Mandir to invite Him. A small idol of the Lord is taken home and returned after the celebration is over.

After the fulfilment of their wishes, devotees arrange Dal, Bati, Churma ‘prasadi’ in the premises of the Mandir in which relatives and friends are invited. The ‘prasad’ is relished as the Lord’s blessing.

At this famous temple, the festivities begin a day before Ganesh Chaturthi. There is night long ‘jagran’ and ‘bhajans’ in praise of the Lord are sung. The auspicious day begins with ‘abhishek’ early in the morning, followed by ‘Mangla aarti’. Then the idol is tastefully dressed with ‘sone ki aangi’, thin gold foil pasted with a coating of ‘ghee’ and ‘itr’.  A lot of jewellery is also put on. Flowers are used to make it more attractive. Grahshanti Yagna is also performed. Dhwaja is offered before the aarti at noon. The evening ‘aarti’ is performed at sunset. The ‘darshan’ is open throughout the day and closes with ‘shayan aarti’ at midnight. Devotees keep visiting the temple with floral garland, ‘laddus’, coconuts, etc. as offerings.

We are happy to say that the over thirty articles on different aspects of Udaipur like lakes, palaces, temples, festivals, etc. By Ashok Kumar Mathur have been greatly appreciated by our readers.You may go to www.ashokmathuronudaipur.com