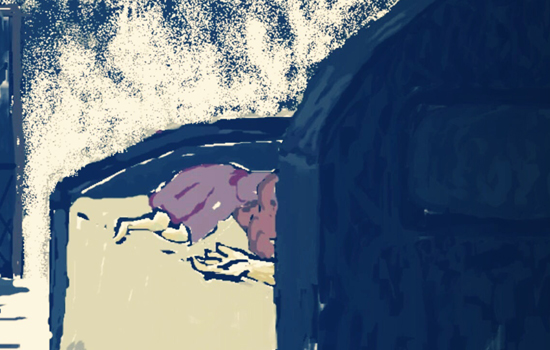 New Delhi:(Arkaprava Das) Darkness was crowding from all around, both outside and inside me. The climate too, was getting worse and worse as time passed. I was looking outside, but could not think properly what to look for. Still, I had to wait and look for, whatever was visible. Since, that was the only way of getting slight comfort and hope. The comfort to see him coming back at any moment and the hope of getting out of this stifling stagnancy. I shivered as I felt the wind blowing with the rain. Rain drops spattered on my face. I shivered more and felt so weak.

“Hold yourself. He hasn't returned yet. You've seen that with your own eyes just now,” my consciousness came ahead in command over my anxious mind. I retracted and pulled myself up to face the situation keeping myself perfectly strong to bear anything to come. I went inside and stood beside her bed. She was lying still showing no sign of life coming back in her body. I sat down, held her arm and felt something to console myself. I could not think of doing anything but just to gaze her constantly as long as I could. I could not transform my helplessness into the last thing that I sought at that moment. The thing that arose in my mind was the few lines that he scribbled on a piece of paper before leaving.

'Father....Mom is not talking. I'm going to take the doctor. Stay at home.'

There was nothing else. But I needed much more now. I could not think how much more, but far much more than what he conveyed. Kisha was asleep and so her weeping had stopped. I saw her huddled at the bottom of the bed clutching the laces of her saree. Kisha wont be able to give me any better answer than the note. And I could not find any better option to do except waiting in the dark. Rain continued to pour outside in the same way without stopping.

I shook a little when I noticed a feeble quiver on her lips. I leaned more towards her. A flash of hope made me take a deep breath as I found her awaking. She moved slowly and a faint sound came out of her mouth as she did that. I was becoming desperate but forcefully controlled my impulses and watched her silently. As she showed more signs of aliveness, I touched her forehead gently and called her. With some effort, she half-opened her eyes.

I could not give any prompt reply but kept on watching her.

“They're all right. Stay calm and rest. Here, have this,” I said and brought a glass of water near to her mouth. She refused.

“I want to see them,” she urged. Her eyes were looking straight at me without changing the question. There was nothing that I could find to rub out the question from her eyes. Suddenly I wished to laugh to my loudest voice to make her forget everything. But, I could not. I could not think any means to make her satisfied. Her eyes went on staring at me. They were tired yet they were still waiting for a reply.

“What happened to you? Both of them were so scared when I returned,” I picked one of several other silly questions to stop her.

“Nothing. Never worry,” she said.

“Can you please bring them near me?” she asked the question that I was thinking her to repeat.

I was now prepared and quietly said that they're asleep. I added a few more statements so that she believed me. I was watching her eyes. Certainly, they were not contented with whatever I said. But, I kept trying.“Please try to sleep now. Preet has some important classes for tomorrow. I asked him not to panic and prepare well for them. He is tired and gone to bed. And you know it well how crazy Kisha is. It became difficult for me to comfort her. Somehow, I managed and was waiting for the doctor to come. He will be coming at any moment. Sleep now,” I recited all these words in the most natural way as I could and never cared if she listened them or not.

“Never say anything to them if I pass tonight,” she said slowly after remaining silent for sometimes.

“I do not need anything else.”

I heard her words but was not willing to realize them properly. I was getting more and more concerned over the passing time. I was feeling fatigued and bitter. Above all, I was simply watching everything helplessly. Once or twice, I began to doubt about my own self. Inside my mind, I was frantically looking about for the right way that would convert everything to its desired state.

“Nimmi...its OK...Do you need some medicine? Tell me. I'll get it for you. Now, don't start thinking like that. You know I don't like all these,” I said to her keeping myself extremely calm and stood up to go to the balcony.

“I do not need anything,” she replied.

I turned and faced her. She was looking at me. Now, her eyes did not ask any questions. There was a stable certainty in them.

“Why are you so eager to see the kids?”

“They're born from me,” her eyes were closing as she spoke. I rushed close to her to assure that she was not losing her consciousness once again. She was awake but was lying stiffly. For a moment, I made up my mind to tell her the truth but soon reverted back to my silence. I admit that I was not a perfect man to know her thoroughly. I never faced any serious problems before because of such ignorance. Now, I was feeling stupidly puzzled. I was unable to decide what would I say to her.

She was not willing to talk at all but responded me weakly, “I want them to live and grow.”

Those words made me overwhelmed.

“They're growing well Nimmi...You can take my words. Now, please make yourself easy or how will you see them growing?” I said them not knowing what all I was saying exactly. I just tried to remain trusted to her. I saw a gentle smile to flow across her face and she took a deep breath.

“Why can't you spare me?” she posed a strange question. I felt very much irritated but I never revealed it. I grazed my hands over her forehead. She kept on taking slow deep breaths. She said no other words.

“Don't you know how they love you? They need you more than me. Don't you love that?” I spoke up since I was hating her silence. She remained stiff, voiceless. I watched her and waited again. I was a regular man leading a routine life. Differences never attracted my eyes. I even skipped them deliberately with no such rigid reasons. I wondered how much different she could be than me. It was a fearful thought. I wished her to get me out of that miserable state but she never helped. Instead, she was becoming more and more obscure before me.I could not stand any more and rose up. I needed to sort the matter as soon as possible. I could not let her become stiffer and aloof. I could not leave my son to go missing in the dark rainy night. I needed my peace back at once. I rushed outside. There too, I saw no light. Night became darker illuminating the obstreperous might of one single entity that was roaring with fun before me - the Rain. I braced myself for the struggle. I looked up to observe numerous rain drops that were falling down from an unknown height where I could not reach myself.

“Will you stop if I beg?” I was screaming inside.

“What wrong have I done that I'm dragged into this ugly torture?” At that moment, there was no one else to whom I could confide my last appeal. I cried for help to the sky and didn't know how long I did so. I was terribly scared to leave to anywhere else since that was where I obtained some solace.

I heard her voice calling me. I could not move at once in response. At last, I pushed myself hard to come inside. I saw her sitting up and looking at the place where Kisha laid. She remained silent and steady. I was about to say her everything but she spoke again.

“Do not try to give me any false satisfaction. I do not need it. Just bring him to me,” her voice reached me clearly. It satisfied me more than anything.

“Of course, I'll,” I answered her.And there was a knock on the door. It was clear and I rushed without feeling how or where I stepped.

“Nimmi, will you be able to come and see him?” I shouted and called her as I saw him in front of me.