Ambamata Mandir: The Benevolent Mata who came to Udaipur to heal Maharana Rajsingh 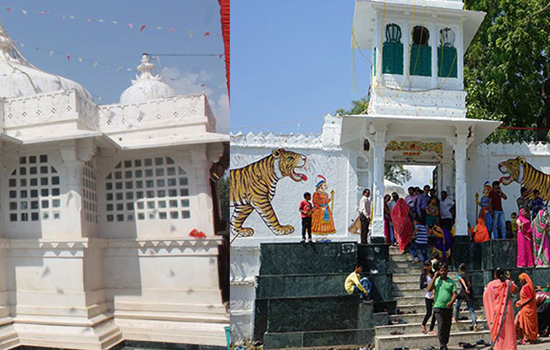 One of the most highly revered Devi temples in the whole of Mewar, Ambamata Mandir, located on a height in the west of Udaipur outside Ambapol, Ambamata Mandir was built by Maharana Raj Singh.

Related to the construction of the Mandir, there are some fascinating details that are lesser-known. It is said that once the erstwhile Maharana Rajsingh had severe eye trouble. Every kind of treatment was given. The Rajyavaidyas did their best. But the Maharana did not get any relief. Some well-wishers suggested that he should go to the Ambamata temple in the hills of Arbudanchal and pray to her. Heeding their advice, he decided to do so and gave orders for making preparations for the journey. Incidentally, the night before he was to start, he had the ‘darshan’ of the Mata in a dream in which she told him that he need not go there and she herself would come to Udaipur. She also indicated the place where she was to appear. In the morning, the Maharana expressed his happiness before all in the palace. He also ordered digging at the place where the idol was to appear. Soon the work started. As the digging progressed the Maharana began to get better. It was a miracle that as soon as Devi’s idol was seen, the Maharana was completely cured. He expressed his desire to have the ‘darshan’ immediately and was overwhelmed when he saw the idol that had appeared in Chouthmata Chowk located in the courtyard of the present-day temple.

After the appearance of the idol, when the temple was under construction, it was kept on a ‘chabutra’ outside in a place that had four rooms. It is known as Charanpatka or Charanpaduka and is located outside the temple under a neem tree. Devotees bow before this ‘chabutra’ before entering the temple. The Maharanas who visit the temple during Navratri and other festivals also do the same. The Maharana also ordered the making of an idol exactly like the one he had seen in his dream. The ‘pranpratishtha’ of both the idols was done on Jestha Shukla Dashmi V.S. 1721.

Built on a 20ft high platform, the Mandir is surrounded by a high wall for safety. There is a ‘nakkarkhana’ on the entry gate, on either side of which are paintings of lions, the vehicle of the goddess.

The east facing idol with four ‘bhujas’ has ‘kharag’ in the upper right hand, ‘chakra’ in the lower right hand, ‘shool’ in the upper left hand and ‘pan patra’ in the lower left hand. It is simple but its finish is highly refined. The facial expressions are exquisite and simultaneously express the feeling of rage for the demons and blessings with ‘abhaya mudra’ for the devotees. According to an inscription at the feet of the idol, it was made by Sutradhar Surtan.

There is an idol of a lion in the ‘sabha mandap’ of the ‘prasad’. On the door of the ‘garbhgriha’ there are paintings on either side including those of the Maharanas performing ‘puja’ and having ‘darshan’. The light coming through the glasses of different colours on the walls illuminate the place.

One speciality of this Mandir is the large number of wall paintings of the times of Maharana Rajsingh that are important as they are the oldest specimens of line drawings. One of the interesting one is that of Anchal Pakshi, a huge specimen of Garuda that could fly holding an elephant with its claws. The paintings that had become invisible through coatings of lime have been got restored by Shri Arvind Singh Mewar.

Outside the Mandir is the ‘chabutra’ of ‘charanpaduka’ and in front is a huge open ‘chowk’ where are performed ‘gavri’, ‘ger’ and ‘garba’ dances during Navratri when huge crowds of devotees from distant places throng to the Mandir.

Special rituals are performed in the Mandir during Navratri. There is a separate ‘havan kund’ for ‘havans’.

The ‘poshak’ of the Mata is changed every Saturday. Devotees who want to offer new ones have a long wait for their turn. The costumes are stitched by the wives of the ‘pujaris’.

So highly revered and popular is the Mata in the whole of Mewar that many songs in her praise have been composed and sung with deep devotion. Her greatness is expressed in Gavri songs and folk plays. One of which is based on the slaying of the demon Mahishasur by the Goddess.

It is believed that the Mata fulfils the desires of all her devotees who pray to her sincerely. Infertile women are blessed with children. Persons involved in litigation win the cases while dry wells of farmers get filled with sweet water. Persons who have eye trouble are cured by washing their eyes with water used for the Mata’s ‘snan’ and then applying ‘kajal’ that comes out of her ‘akhand jyot’.

A large number of devotees living in the vicinity of the Mandir regularly attend the morning ‘aarti’ and begin their day only after her ‘darshan’.

Dear Viewers,We are happy to say that the over thirty articles on different aspects of Udaipur like lakes, palaces, temples, festivals, etc. By Ashok Kumar Mathur have been greatly appreciated by our readers. You may go to www.ashokmathuronudaipur.com