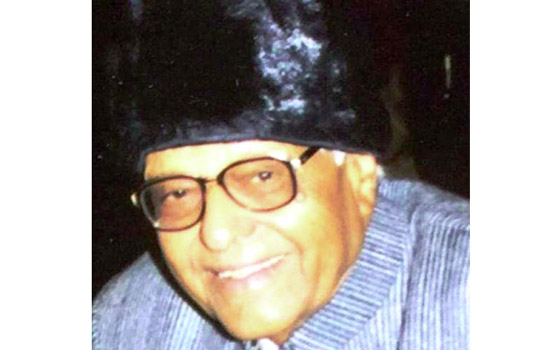 Veteran communist leader Comrade Dushyant Ojha passed away at the age of 89 years in Jaipur on Tuesday, 14th April, 2020. He was a former member of the central committee of the Comunist Party of India and also state secretary who served the party from 1953 till his demise in various capacities. A founder of almost half a dozen public institutions and fronts, he dedicated his life to the uplift of the masses and to build a harmonious society. A very great orator, a prolific writer, poet, journalist, a popular organizer and committed communist Comrade Ojha had a very good relationship with almost all major political leaders of his time in the state. Recently, CM Ashok Gehlot had visited his home to meet him.

Dushyant Ojha was born in 1931 at Shahpura, near Bhilwara. His father Ramesh Chandra Ojha was a freedom fighter at whose residence Prajamandal was constituted in 1938. His mother also went to jail as a congress activist. Since his father participated in protest movements and demonstrations against the British rule the erstwhile king of Shahpura fired him from job and as a result Ramesh Chandra Ojha was forced to support his family by weaving mats and Durries. According to journalist Moolchand Peswani his family was exiled for two years during which they lived in Govindgarh, Sikar and returned to Shahpura after two years. Dushyant ojha was brought up in this political atmosphere and therefore got involved in activism during his school days. Initially he joined students Congress . When Shiv Charan Mathur was its secretary, he was a member of the executive. In 1946 he hoisted the tricolor on the building of Darbar High School in Shahpura. He also participated in the movement against fee hike in Ajmer. A similar students’ protest movement was going on in Gwalior on which police opened fire. There was a protest demonstration in Ajmer against that. Dushyant Ojha participated in that and was arrested in 1948. He was exiled from Ajmer thrice for protesting against the government every time for three months. This hampered his education . After Gandhi ji’s assassination there were communal riots in Ajmer. Dushyant Ojha was not happy with the role of Congress leaders and workers during the riots. He found that communist leaders comrade Pannikkar, Hukam Raj Mehta and Komal Kothari were working to establish peace and communal harmony. In March 1949, on the issue of students’ interest he boycotted the meeting of Students Congress. Meanwhile he got works of Rahul Sankrityayan, Premchand, Krishna Chander from Shri Komal Kothari. Much influenced by these works and also by the work being done by Komal Kothari, comrade Hukam Raj Mehta and Comrade Pannikkar he joined the Communist Party of India in 1949. In Ajmer he started with Dada Potkar in Railway Labour Union. Later he also worked with Kishangarh Textile Labour Union and Kisan Sabha in Asind with Shanker Dev Bharti.He participated in the first open conference of the Communist Party of India in 1950 in Jodhpur.

Dushyant Ojha was elected as the member of the state committee of the CPI in 1953. Next year he became the district secretary of the party’s Bhilwara unit. At that time Mohan Lal Sukhadia was the Revenue Minister of the government of Rajasthan. A powerful protest demonstration was held at Jaipur in opposition of tax on cereals. Hundreds of peasants participated in the demonstration from Kapasan, Jashma, Asind, Badnaur and Shahpura in the leadership of Comrade Dushyant Ojha. The same year he led movements of Forest Rights Committee, Mining Labour  and Power House Workers’ Union.

In 1955 Dushyant Ojha led a contingent of twenty five people from Rajasthan for the liberation of Goa. They participated in a long march from Sawantwadi. It was a 170 Kms long march in which about 5000 people from all over the country were participating. This march is often compared to the Long March in China.

In an interview he mentioned a powerful students’ movement held in his guidance  in Bhilwara in 1970 which continued for twenty seven days and a ndemonstration was held defying section 144. Nearly fifty people were arrested in that movement.

He was associated with the activities of Progressive Writers Association, Indian People’s Theatre Association (IPTA), Indo Soviet Cultural Society and founded a number of organizations like Sampradayikta Virodhi Committee, Vijay Singh Pathik  Smriti Sansthan, Swami Kumaranand Smarak Samiti, Akhil Bhartiya Shanti evam Ekjut ta Sangathan etc.  He traveled across the state to strengthen the party and its front organizations. He came to Udaipur also quite often. Comrade Meghraj Tawad was a strong pillar of the Communist Party of India in Udaipur.

In 1973 he moved to Jaipur to work for the party at the state level. From 1973 to 1983 he looked after the  editing ,publication  and  distribution  of the Party’s paper Janyug.

He got his degree in Law as a private student and also wrote for prestigious newspapers like Times of India, NavBharat Times, Statesman, Lokwani, etc.As a communist leader he was a member of a number of delegations to countries like Russia, Bulgaria, Czechoslovakia, Germany etc. He travelled more than two dozen times to represent India in these countries.

In an interview he told that CPI supported Congress during emergency because it was the view of the party that the movement led by socialist leaders like Jai Prakash Narayan will ultimately help strengthen Jansangh and the right wing in India. History tells us that this is what happened later. He told that American Imperialism is capturing the world through globalization and market capitalism. He was of the view that the Indian state is also becoming a pawn in the hands of international market and ultimately the United States of America. He believed that an international cooperation of the working class of the world and friends of people could only be the way to fight out the imperial and capitalist forces.