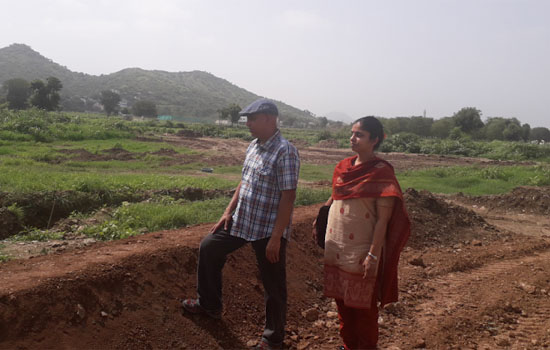 Nandita Singh is an Associate Professor at Royal Institute of Technology (KTH), Stockholm. She has the distinction of being placed in the famous ‘Marquis Who’s Who in the World, 2006’ for her outstanding contribution in defining an alternate model on water resources management. She also holds a distinguished place amongst the ‘Leading Scientists of the World’ (2006) compiled by the International Biographical Centre, Cambridge, England.

She is an academician, author and activist in water sector with more than 14 years of experience in research, education and advocacy. She has pioneered several path-breaking research projects in India with participation of local Indian research institutions between 2003 and 2015, attracting funds from Swedish and other international research funding agencies. These research projects have led to several important policy recommendations.

She has been instrumental in establishing and strengthening educational cooperation between Sweden and India through the Linnaeus-Palme Academic Exchange Program supported by the Swedish International Development Cooperation Agency (SIDA) and the Erasmus Mundus Program supported by the European Commission. Under these programs she helped establish academic exchange between KTH and the National Law School of India University, Bangalore which continued for eight years and has recently initiated a new academic exchange with A. N. College,Magadh University, Patna.

She has served as an expert in the water sector independently and as member in working groups in Sweden, India and also at many other places.As a member of the Cluster Group on Water and Rights at the Swedish Water House, she has actively contributed to the development of an international Policy Brief.Also, she has provided valuable inputs for future directions of research in the field of water resources management in India, as a part of a project coordinated by the Indian Institute of Science, Bangalore for the Government of India. She has also been an advisor on water issues to the private sector, having also served as an expert on Indian water quality management for the Swedish Textile Water Initiative (STWI) at Swedish Water House, Stockholm.She has founded the Millennium Water Story together with her husband Om Prakash Singh in 2016, with the aim of communication, education and sensitization on water as a scarce resource through the medium of photo-documentary works on water resources management.It is the first initiative ofits kind in the world which intends to actively contribute towards a water-secure India through positive changes in attitude, behavior, policy and action in thesector.

The discourse on the human right to water presents deliberations on the concept, content and rationale for the right, with little attention to the practical question of translating the right into reality. This book aims to fill this void by focusing on 'realization' of the right by its holders, examining how effective the mechanisms are for 'implementing' the right in enabling its universal realization. In a quest to answer this question, the book draws a conceptual differentiation between 'implementation' and 'realization' of the right, arguing that unlike implementation - which is an objective process of creation - and implementation of measures such as legal frameworks, institutional structures or policy and action guidelines, realization of the right is a subjective process that extends much beyond. It takes shape within specific contextual settings which may include varied situations, yet remains neglected in the related academic and action forums. This book attempts to address this void by discussing some of the most significant contexts and the underlying problems and concerns that strongly influence realization of the human right to water. It contends that if the right is to be truly realized, these different contexts - which can be further classified as 'objective' and 'subjective' - must be understood, analysed and appropriately addressed before framing and implementing relevant action. The book further situates the human right to water discourse in a broader interdisciplinary perspective, expanding its scope beyond the narrower legal dimensions, linking it to the wider field of water resources management/governance. Through the novel ideas it proposes, the book makes an innovative and unique contribution in the field of human right to water which is of great scientific value