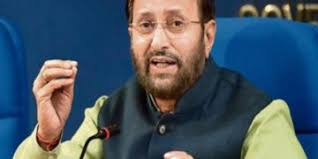 Information and Broadcasting Minister Prakash Javadekar has said the government has taken several decisions and initiatives to counter the economic slowdown which is due to global headwinds, affecting the Indian economy, too.

Addressing media on the completion of six months of NDA-2 government, in New Delhi on Saturday, the Minister said under the leadership of Prime Minister Narendra Modi, the country is progressing in all spheres, making India an attractive destination.

He said banking reforms, infrastructure development, easing liquidity in the market, reduction in the corporate tax rate and the measure to spur investment are some of the key decisions taken by the government to tackle the slowdown. He said recapitalization of banks and disbursal of 2 lakh 50 thousand crore rupees by the banks have resulted in more money in the hands of people.

Highlighting other achievements of the government, Mr. Javadekar said the country maintained its composure after the Supreme Court's verdict on the Ayodhya land dispute, paving the way for building Ram Mandir. He said Prime Minister Narendra Modi has launched Swacch Bharat to ensure a clean India and also initiated a movement against the use of plastic.