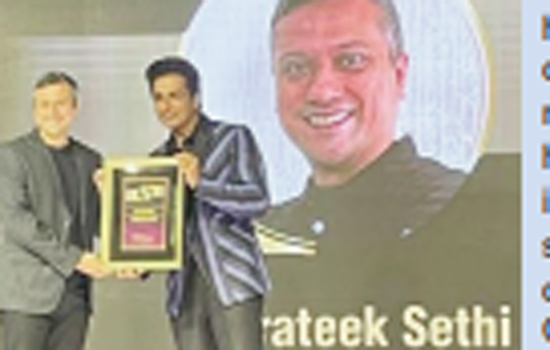 Gurugram: In a glittering award ceremony recently held in Gurugram, a dynamic entrepreneur, Prateek Sethi for his exemplary leadership has been named in the coveted list ofTimes 40 under 40 Leaders and was awarded by the hands of famous Bollywood Actor & Philanthropist, Sonu Sood. PrateekSethifelicitatedatTimes40under 40 Times 40 under 40 is an exclusive platform created by Optimal Media Solutions under the aegis of Times Group that identifies, encourages and provides recognition to the top 40 brightestyoungentrepreneurs,leaders,achievers and innovators who are under 40 years of age and have been game-changers in true sense. The recipients of the exclusive Times 40 under 40 recognition belong to various categories like Auto, Retail, Real Estate, Health Care, E- commer ce, FMCG, Sports , Entertainment and Service Industry to name a few. To recognize these bright minds, a survey was conducted and several entities were assessed. Undoubtedly, the winners fared through an exhaustive criterion and made it to the top 40.Best known for his stint on the popular TV show FAQ on the Pogo channel, Prateek h a s carveda nichefor himself i n th e sphere o f Creative Communication Design. He started his design firm Trip Creative Services in the year 2009 and hasn’t looked back since. Today, he is a producer, designer, TEDx speaker and entrepreneurwhosecompanyTripCreativeServices is redefining the sphere of creative communication.Speaking on this spectacular achievement, Prateek said, “It’s always been a team effort. I love my team. Super thankful to my family, awesome clients and all the various teams I’ve had the pleasure of building and being a part of!”Owing to his unmatched spirit and ability to attract young talents with his valuable experience and perspectives, he has now also made it through the list of Times 40 under 40 Leaders and is all set to take the industry by storm in the times to come.