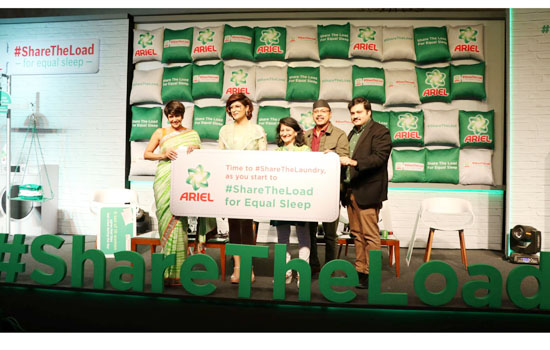 Udaipur : Over the last 5 years, Ariel India has continuously sparked conversations around the unequal division of domestic chores within households and urging more and more men to #ShareTheLoad. #ShareTheLoad is not a regular campaign, but a movement for social change. In the spirit of keeping this conversation going and furthering the cause of equality within households, Ariel launched the 4th chapter of ShareTheLoad through a panel discussion attended by Bloggers of the city. The panel comprised of noted film maker and author Tahira Kashyap Khurrana, Dr Nandita Shah of NGO Akshara Centre, BBDO Head Josy Paul, and Sharat Verma, CMO, P & G India and Head, Fabric Care, P & G ISC. They brought forth insightful conversations and personal anecdotes around the need for women to get equal sleep; the lack of which impacts her everyday life.

A survey conducted by an independent 3rd party revealed a startling and uncomfortable truth – 71*% women in India sleep less than their husbands due of household chores. Taking the conversation further from where we left last year, Ariel realized that the impact of men not sharing the load is far deeper and stronger. Uneven division of household chores like laundry is coming in the way of women getting enough sleep and rest. In fact, in many households, women are the first to wake up and last to sleep. This time, the conversation is about these unaccounted hours of early mornings and late nights, which are usually spent in wrapping up the chores she couldn’t complete during the day! When men don’t share the load, what ends up getting impacted is a basic and everyday phenomenon – sleep! Lack of sleep is thus almost an indicator, of the inequality within the household.

The new film, launched across social media and digital platforms, seeks to highlight the impact of unequal division of chores on their wife’s well-being, and leverage this with men to drive an urgency to act. Over the last 5 years, Ariel has been able to impact the thought process for millions of men. From 79**% men in 2014 who thought laundry was only a woman’s job, the number has steadily declined, being 41*% in 2019. However, even today, only 35*% men contribute daily towards household chores. Ariel has taken the onus to set the bar higher in 2020. In a survey, most men agree that washing clothes in a machine are the easiest chore for them to start taking over. Thus, Ariel aims to make laundry the face of this movement against inequality within households by urging men to take the first step to #ShareTheLaundry and eventually, #ShareTheLoad for equal sleep. After all, with Ariel anyone can get an outstanding clean, no matter who does the laundry!

The film, conceptualised by BBDO, is depicted from the eyes of a little girl devoid of any conditioning, who notices her mom is missing at night while she is asleep and continues to notice her running around doing multiple things, tired and sleepy. The father’s moment of realization is also in a way, driven by the daughter missing her mom at night.

This inequality within households manifests itself in many more ways for the woman. More than half* the women feel that their children miss out on them due to the burden of household chores these women must carry. 3 out of 5* women agree that they feel tired during the day. Interestingly, in the same survey, half the women agreed that if they had some free time during the day, they would wish to sleep instead of doing any other activity.

Noted film-maker and author Tahira Kashyap Khurrana said, “The film has opened my eyes to a harsh reality. Sleep is a basic need, and if that starts to get impacted, it is a matter of time that health and well-being will take a hit too. When husbands don’t do their bit, it impacts their partner’s everyday life, which most men don’t even realise. I just want to convey to men that if they really love and care for the women in their lives, nothing should stop them from being Equal Partners at home. Ariel is showing an easy way to take that first step, and #ShareTheLaundry to #ShareTheLoad.”

Commenting on the Movement, Sharat Verma, CMO, P&G India and Head, Fabric Care Indian Subcontinent, said, “This year, ‘#ShareTheLoad for equal sleep’ seeks to give us one more compelling reason to start sharing the load. Uneven division of household chores is getting in the way of women getting adequate sleep and rest, and hence the conversation this year is about bringing this to light to enable conversation. 71% of Indian women are sleeping less than their husbands due to these household chores, as they end up waking up early and/or staying up late in order to get everything done. The film is designed to be a mirror into the daily lives of many women, in order to make this unaccounted time count. And with this, Ariel wants to move us all from intent to action by urging them to #ShareTheLaundry and take the first step towards #ShareTheLoad.”


Josy Paul, Chairman and CCO - BBDO India adds, “How can Ariel as a leading brand truly create change? That was what we wanted to do with this year’s campaign for #ShareTheLoad. And hence, by steering the conversation around the impact on the women’s wellbeing when their partners don’t partake in domestic chores, we want to get men to show solidarity via action. A significant part of the film rests in the early hours or late nights, which is the time that usually goes unaccounted. It is the theatre of the after-hours. It is about making those hours count!”

Ariel India launched the #ShareTheLoad movement in India to address the inequality that exists within Indian households. In 2015, we raised a triggering question ‘Is laundry only a woman’s job’ drawing attention to the uneven distribution of domestic chores. With ‘Dads Share The Load’ in 2016, the conversation was aimed at helping to address the root cause - the cycle of prejudice passed down from one generation to the next. In 2019, we started to drive action, urging parents to raise their sons like they have been raising their daughters, so that the future generation is more equal!