THE CONVERSION Movie Releasing on 8 oct 2021 all India 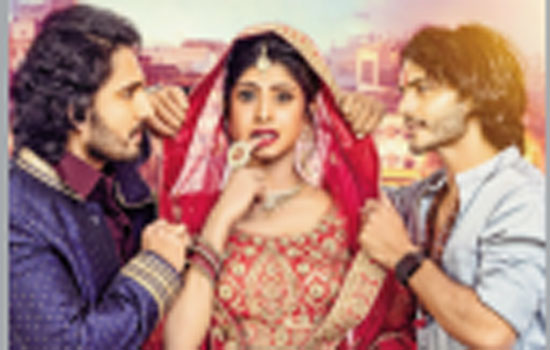 After the successful run of his debut film Teri Bhabhi Hai Pagle, director Vinod Tiwari is all set with his next The Conversion, a story about a very sensitive issue prevailing in today’s India Catch the trailer here: https://youtu.be/mcz_eQAr79M TheConversion”isastoryofalovetrianglebasedinBanaras and is all set to release in 8th oct 2021. Shot in the beautiful ghats of Banaras, the film explores the dilemma of religious conversions that happen during love marriages in India. Talking about the film director Vinod Tiwari says " We have been waiting for this moment,notonlybecause the film is really important tomebutalsobecausethis subjectwillbringthesocial awareness amongst today’s youth.Conversion is not a simple love triangle between Bablu, Dev and Sakshi but a film that sensitively explores the dilemma of religious conversions that happen during love marriages in India." Talking about her character actress Vindhya Tiwari says “I feel fortunate to be a part of a film which will bring the social awareness especially amongst today’s youth about the religious conversionswhichhappensduringlovemarriages inIndia. To choose a life partner is everyone’s right but just like that to stick to what religion you belong to is also one’s right. As the girl leaves her house post marriage, these conversions are forced on her, we hear about them but to see how it really happens and how it effects the girl is the story of Sakshi’s life”. Brining in life the character of Dev, actor Ravi Bhatia says “The conversion is special for me in many ways and to be a part of Vinod ji’s journey with The Conversion was one of the dreams come true moment for me. The Conversion is not just a film but a social message which needs to be seen by everyone in our country”. PrateekShuklawhowillbeportrayingthecharacterofBablu says “ I have never played as challenging and vital role as Bablu in my career. I have tried to give my 100% to bring Bablu in life on screen. This character will surly make a deep impact on the audience”. Directed by Vinod Tiwari “The Conversion” will be starring Vindhya Tiwari, Prateek Shukla and Ravi Bhatia in the main lead. The cast also has names likes Sapna Choudhary, Vibha Chibber,SunitaRajwar,AmitBehl,SandeepYadav,SushilSingh Vijay Trivedi and Manoj Joshi in the main characters. The ConversionisstorybyVandanaTiwari,musicbyAnamikChauhan, DOP Navneet Beohar, produced by Raj Patel, Raj Nostrum , Vipul Patel and presented by Nostrum Entertainment Hub. Eco-Friendly Green Ganesha YoYoHoneySingh, TheInternationalAward-WinningRapper Made His Presence Felt At Bhamla Foundation’s Green Ganesha Pandal to pay his obedience to Lord Ganesha with Maha Aarti Pollution in India is a serious issue while water pollution, in particular, is touted to be an even bigger problem! Ranking higher than smoking, high blood pressure, child and maternal malnutrition, and risk factors for diabetes, water pollution is a problem where humankind has to immediately take action in order to reverse it! Bhamla Foundation, through its environmentinitiatives,isworkingtowards curbingthemenaceofwater pollution, keeping in line with the initiative to prevent further water-quality degradation. Following the #BeatPlasticPollution and #HawaAaneDe musical campaign,Asif Bhamla of Bhamla Foundation has teamed up with Rap sensation Yo Yo Honey Singh to promote and propagate a Green Ganesha keeping the environment in mind and pollution in check! Asif Bhamla of Bhamla Foundation says, “I am glad that Yo Yo Honey Singh and other members of the entertainment fraternity have always come together with ourBhamla Foundation with a hope to make a lasting difference, so our children can drink water that won’t poison them and breathe air that won’t harm them. This is the time now, to make a difference, before the very precious water that we drink, kills us!”Besides Yo Yo HoneySinghandAsifBhamla,MerajHusainandSaherBhamla of Bhamla Foundation among others joined the celebrations as well.