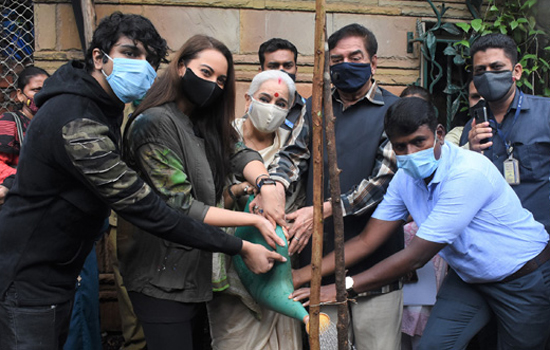 Shatrughan Sinha, Sonakshi Sinha, Poonam Sinha along with Young Turk Vedant Gill became the latest celebrities to join in the BMC’s ‘Be A Tree Parent’ MEGA Vriksha Campaign by adopting a Sita Ashoka and a Neem tree planted in tree pits near the Sinha residence in Juhu. They have joined the likes of Hon. MP Smt. Hema Malini, Ranvir Shorey and son Haroon Shorey, Anil Kapoor, Anupam Kher, Amit Behl, Dr. Aneel Kashi Murarka, Saniya Saiyad, Ashnoor Kaur, Advait Mote and MLA Shri Ameet Satam who are all proud tree parents!
Besides the celebs, citizens joined in and became the protector of the trees, thus setting forth a movement that will make a difference leaving behind green footprints.
Said Vishvas Mote, Asst Commissioner, BMC, K West Ward, “It is an exhilarating feeling to see citizens inspired by celebrities of the likes of Shatrughan Sinha, Sonakshi Sinha and Poonam Sinha coming together to plant trees and adopt them, youth like Vedant Gill of Make Earth Green Again MEGA Foundation and Shaan Lalwani of Vriksha are selflessly aiding this move. We will hope to plant many, many more trees as compared to what Cyclone Tauktae claimed.
Shatrughan Sinha lauded Vishvas Mote’s initiative while Sonakshi Sinha expressed her desire to plant many trees and protect them. Poonam Sinha felt that the tree plantation had a special significance as the Sita Ashoka plant, a native indigenous species, was actually being planted near their Ramayana bungalow, and it is but natural that the Sinhas be the guardians of the Sita Ashoka sapling.
Vedant Gill added that when protecting trees, we are actually protecting our own selves, and that thanks to people like Anusha Srinivasan Iyer and Vishvas Mote, the residents of K West Ward, we get to see these green patches in their concrete urban jungle grow back.
World Environment Day 2021 marked the start of BMC’s ‘Be A Tree Parent' MEGA Vriksha Campaign. Instituted by the K West Ward Asst Commissioner Mr. Vishvas Mote, along with Anusha Srinivasan Iyer of Make Earth Green Again MEGA Foundation and Shaan Lalwani from Vriksha Nursery, the campaign involves and encourages societies and residents to adopt tree pits from the 348 Mumbai locations where trees had fallen in the K West Ward, post Cyclone Tauktae, and replant identified, fast-growing native tree species in those locations.
"Vishwas Mote, Asst Commissioner K West Ward is a visionary. It is thanks to his efforts, that we, at Make Earth Green Again MEGA Foundation, are helping make the vital difference of making our ward get back its lost green glory. The celeb participation and the ever-willing citizen support, as well as that of the police who are willingly planting trees, strengthens our resolve," expressed Anusha Srinivasan Iyer, Founder, Make Earth Green Again MEGA Foundation.
The campaign has also seen active participation from police personnel and citizens alike. And the numbers seem to only be growing. Check out the adjacent pictures!