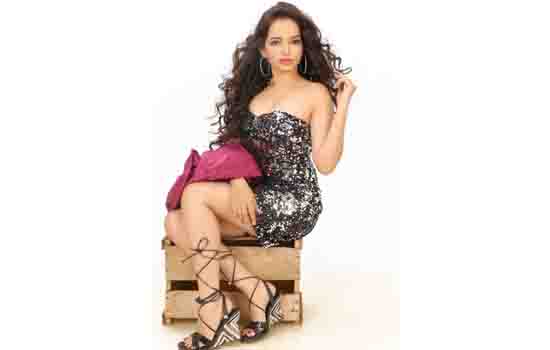 Now a days young, glamorous and versatile Actress Aarushi Sharma has been attracting viewers with her acting skills. Aarushi Sharma is playing a role of a sight less girl in Rashmi Sharma Production’s Mythological TV serial “Jag Janani Maa Vaishno Devi” being telecast on “Star Bharat” from Monday to Friday at 9.30 PM, in which the character “Kishori”, played by her is being well appreciated by the viewers. Bhagwan Yadav is the director of this serial.
Speaking about her role actress Aarushi Sharma said that “I am playing a role of blind girl, in the TV serial “Jag Janani Maa Vaishno Devi”,whose name is Kishori.This is very challenging role but I am performing without any formal training.
Director Bhagwan Yadav taught me many things and groomed me, because of which I am able to handle this role very efficiently. Adi Irani is playing the character of my father, while Geeta Tyagi is doing the role of my mother. Gradually I get engrossed in the devotion towards Maa Vaishnodevi and my father begins harassing me and my mother.
About her future plans Aarushi says “I want to do only good and challenging roles in which I will get a chance to do something different and prove my mettle as an actress.I will do less work but will do only good roles. I want to build up my career in films in the future.I especially wants to work in the films from South. Besides I want to do major roles in the serials."
Earlier Aarushi Sharma had played the character of “Chamki” in the serial “Muskan” which was well received. Besides, she has done in modeling and has done commercial and ad films. Her ads of “Parle Hide and Seek” and “Tata Tiago cars” had become hugely popular.