Siddhant Bhosle, May You Be in a League of Your Own: Amitabh Bachchan 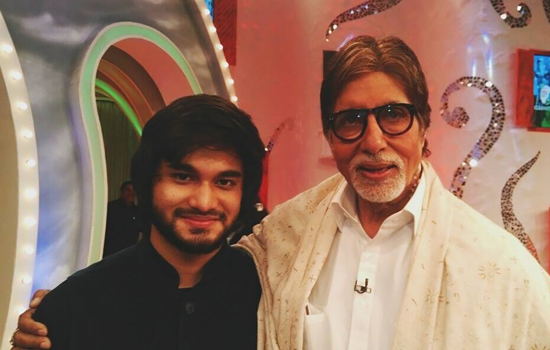 When Siddhant Bhosle, Sudesh Bhosale's son, launched his first original independent song 'Din Aur Raatein' and sent the song to Amitabh Bachchan for his blessings, Sr. Bachchan made a very sweet gesture! He immediately tweeted the song and launched it for the young man. It is also a known fact that Sudesh Bhosale has always been the voice of Amitabh Bachchan, and an unbeatable one at that!
The Superstar took to Twitter and wrote - “Sung, composed, written & arranged by Siddhant Bhosle, son of Sudesh Bhosale, who became my singing voice in my films .. My wishes and love .. may you be in a league of your own!” he blessed. Amitabh Bachchan, whose association has been with Sudesh Bhosale since Ajooba days has seen Siddhant grow up from a child to a fine young man.
“The tweet by Amitabh sir was a big surprise. Dad and I wanted him to be the first person to listen to the song. His feedback is a great learning. But I honestly did not expect him to share it with the world. This was the biggest release for my maiden original song I could ever ask for!”
The production of the song was an experience that the young talent was not accustomed to, due to the COVID-19 lockdown! “Usually, we have a huge team on set during the shoots, however, the lockdown forced us to creatively make things work with what we had. The video has been shot completely at home by my sister Shruti Bhosle. We had to come up with creative ways to coordinate on video call with our supervising DOP Tuhin Mukherjee and Director-Editor Amitesh Mukherjee,” reveals Siddhant Bhosle.
Like anyone else, Siddhant Bhosle was affected by the loneliness of lockdown. “I, too, yearned for comfort, for people, spaces and memories. As a creative person, I took these emotions and channelised them through my songwriting.”
In an attempt to capture these emotions to depict the present as a fleeting moment, something that will surely pass, Siddhant Bhosle tried and motivated the listeners to not lose the ability to fight during difficult times. At the same time, Din Aur Raatein is timeless as it draws a picture of reality with captivating vocals and melody.
Veteran playback singer Sudesh Bhosale is visibly touched by Amitabh Bachchan's familial gesture. “Amit Ji has watched Siddhant grow from a child to a young adult! When he shared the song with his blessings, it regenerated my faith that my son will go a  long way!”
Sung, composed, written and arranged by Siddhant Bhosle, 'Din Aur Raatein' is a blend of International Pop with Indian melodies.