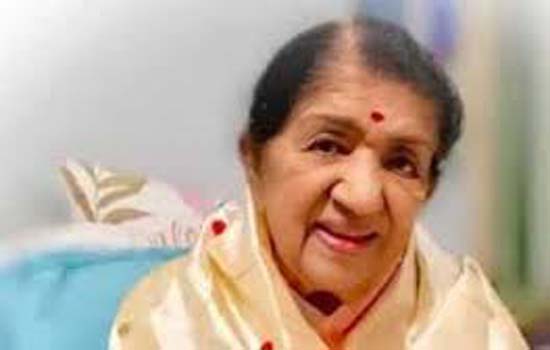 67 is no age to die. Rishi ji was my favourite Kapoor after Raj Saab. It’s a big personal loss to me. With his going, my relationship with the Kapoor family has ended, says Lata Mangeshkar

Everyone who is a fan of the great music in Raj Kapoor’s cinema knows Lata Mangeshkar was the Showman’s muse. He called her Mata Saraswati. He unconsciously dedicated all his best works to her voice.

“I often visited Raj Saab’s home to meet Krishna Bhabhi (Mrs Raj Kapoor) and the children. It was during one such visit that I first saw Rishi who was all of six month old then,” remembers Lata ji.

The moment was captured on camera for posterity. “And recently Rishiji sent me that picture of him in my godee (lap). Main tasveer dekh ke bahot khush hui. Sara Kapoor khandaan mujhse bahot pyar karta hai. But I was specially close to Raj Saab and then his son Rishi.”

Not many people know this. India’s resident nightingale Lata Mangeshkar is known to send gifts to members of the film fraternity whom she is fond of. She sent Rishi a statute of Sai Baba.

After receiving the gift Rishi ji had said emotionally to me, “When Lata ji heard that I was a Sai Baba devotee she sent me a beautiful Sai Baba moorthy (statue). It is a gift I’ll cherish forever.”

Says Lataji, “Jee haan. Rishi ji and I exchanged communication constantly. Even when he went to America for medical treatment he would call me. I would call him to ask about his health. When he returned he assured me he had recovered.

And now all of a sudden, he’s gone. Mujhe vishwas nahin hota woh chale gaye. 67 is no age to die. Rishi ji was my favourite Kapoor after Raj Saab. It’s a big personal loss to me. With his going, my relationship with the Kapoor family has ended.”

Lataji loves Rishi’s acting. “He was a natural-born actor, born for the camera. So handsome and so full of life and sunshine! I loved him in Bobby, Prem Rog, Chandni, Henna, Kabhi Kabhie and so many other films. He was one of the finest actors of our country. Indian cinema has lost a giant. And I’ve lost someone very precious.”Incidentally Lata ji and Rishi’s son Ranbir Kapoor share the same birthday (September 28). “I’ve met Ranbir when he was a child at Raj Saab’s place. But I don’t know him now. He is a fine actor. Is he as good as his father?”