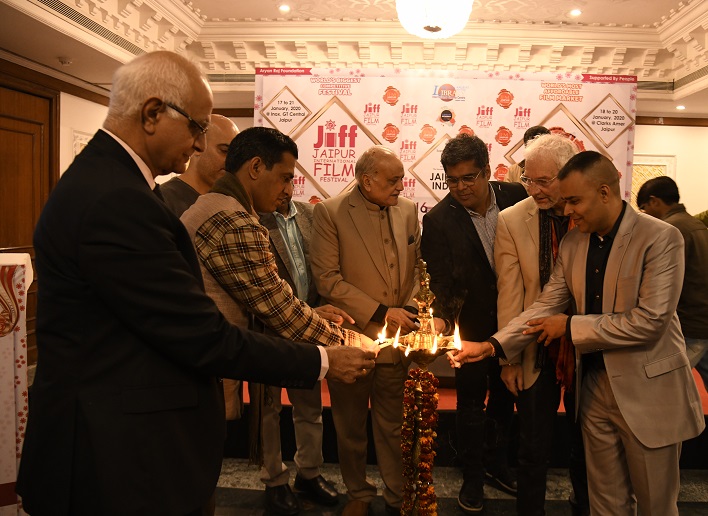 Dialogues and Talks on the world of CINEMA

Jaipur. The second day of Jaipur International Film Festival was filled with cinematic colors. Dialogues were held on various sides of the world of Cinema. The opening of Jaipur Film Market was the most special event on Saturday.

It is worth noting that Jaipur International Film Festival 2020 is being organized in collaboration with Tourism Department, Government of Rajasthan at INOX Cinema Hall [G.T.Central] and Hotel Clarks Amer.

Beginning the session, T.P. Agarwal said that JIFF is counted among the finest festivals in the world. More and more producers and film makers have started coming to the film festival. The filmmakers want their films to be selected for screening at JIFF. JIFF Founder Director Hanu Roj welcomed all the guests. JIFF's CEO Colonel Sunil Dhir thanked everyone who worked behind the success of the film festival. He especially thanked the Tourism Department, which made the Festival possible to go ahead.

If you have a good story to tell, there are many platforms to make films

Next to the inaugural session, a dialogue named Journey and Challenge - Indian and Global Film Industry took place at 12 p.m., in which TP Agrawal, Padmashri Shaji N. Karun, Abbas Tyrewala and Saurabh Verma, Film Maker Kshitij Sharma, playing the role of moderator, raised questions related to the commercial side of the films. Shaji N. Karun asserted that digital media is growing rapidly, and in such a situation it is becoming easier to make films accessible to audiences. At the same time, Abbas Tyrewala said that there is a lot of experimentation in films and he is super curious about how the cinema will take shape in the coming times. While speaking on the commercial side of films, Saurabh Verma opined that the number of cinema halls is increasing, and they do the best to bring more and more people to the theatres. This is the reason that new experiments of food and game zones are happening in theatres. He also said that the current time is the best for story tellers, and there are many open platforms for them to share their story. This is the best time to make movies and tell good stories.

When Marina Libik from Armenia spoke in HINDI, the hall echoed with applaud

When the Film Maker Marina Libik started speaking in Hindi during the session, the hall echoed with loud applause. Marina, who has shot the film in India, said that even if there is good content, the film does not get producers if there are no big stars. Radheshyam Piplwa, the director of Chidi Balla, which was the opening film in JIFF, said that it has been very difficult for him to make a film. At the same time, Saurabh Verma said that to make a film successful, proper planning is necessary. The Title, Trailer and Poster of the film are very important to be gripping.

In the session, there were discussions about shooting locations and facilities for the film industry in Rajasthan. Vinod Bhardwaj questioned the speakers about the merits in the location with a view to making a film in Rajasthan. All the speakers responded that Rajasthan is a very unique place for shooting. It has lakes, deserts, historical places here, which are absolutely beautiful. At the same time, he also discussed about the help from the government regarding the shooting of films.

The co producer and actor of the film 'Faust a Return From the Future' found Indian cinema more open and inclusive. Indian audience will get so easily connected to this film. There are 3 main characters in this film. This film is quite different due to it's poetic ritual, pattern and music. It is enriching for the mind and intellectualism than excess sentimentalism. He shared his Indian experiences that it's his first visit to India where he found people so helpful and kind. He is very keen to know about the archaeological and mathematical aspects of Jaipur.

On 19 January's screening the film is Miracle of Christmas and the director is Eri Tsukimoto. We had a brief conversation with the lead actor Sada. Sada tells us that Audience will like the mysterious projection of love, it's a romantic movie and the lead actor of this movie is Sada.  It's a low budget with an innovative way of filming. Sada and his friends like Indian food specially curry.

International Co - Production Meet to be held at 4 pm

On the third day of the film festival, a special non-commercial screening of the film Spotlight, which has won many awards and titles, will be held at 12 noon at G.T.Central [Audi 1]. The film is being screened by Haridev Joshi University of Journalism and Mass Communication, especially for media persons and journalists. Spotlight is an American biographical drama film directed by Tom Macarthy. The film, made in 2015, is about investigative journalism of the oldest newspaper in the United States.The International Co - Production Meet will be held at Hotel Clarks Amer at 4 p.m., which will be conducted by Hanu Roj, the founder of JIFF and JFM. Next, participation certificates will be given to all nominated film makers from 5:30 to 6 pm.