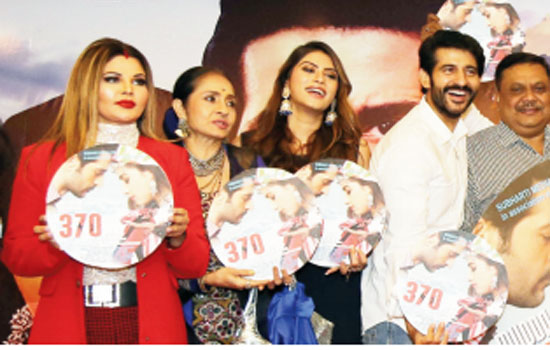 Mumbai: The music launch of Mudda 370 J&K took place in Raheja Clasique Club, Mumbai in the presence of producerBhanwarSinghPundir,directorRakeshSawant,RakhiSawant, HitenTejwani,AnjaliPandey,AaditaJain,ZareenaWahab,Mohan Kapoor, Singer Mudasir Ali, music director Sahil Multy Khan & Nisar Akhtar. Set in the picturesque locations of Kashmir, fondly referred to a heaven on earth and the crown jewel of India, Mudda370 J&K is about the picturesque locales that have turned red with the battles since 1947. If at times J&K has seen rebels turn the snow red, at other times the lush greens singe with the touch of gunpowder due to cross-border terrorism. The story is of the displaced Kashmiri Pandits, their pain and anguish as they became refugees in their own motherland. Kashmir has been seared by the wounds of acts like 370 and 35Aover decades.Even then, the spirit ofKashmiris unbridled, making it the perfect setting for a romantic story between Suraj, son of a Kashmiri Pandit Dinanath and a Muslim girl Aasma. The story is set in 1989, where Suraj andAasma's love gets caught in the crossfire of Kashmiri border militancy. Will the love of Suraj and Asma be able to outlive the bloodshed? This is what Rakesh Sawant's Mudda 370, J&K is all about. The spirit of Kashmir, hope and love in the valley set in back drop of the political miley of J&K. Directed by Rakesh Sawant & Produced by Avani kamal, BhanwarSinghPundir.ThefilmstarsHitenTejwani,AnjaliPandey, Manoj Joshi, Raj Zutshi, Zarina Wahab, Pankaj Dheer, Anita Raj, Mohan Kapoor, Sujata Mehta, Anjan Srivastav, Shabaz Khan, Brij Gopal, MasterAayan and Rakhi Sawant. Introducing two new talentsAnjali Pandey and Tanvi Tondon. The music of Mudda 370 J&K has been composed by Sayed Ahmed, Sahil Multy Khan & Rahul Bhatt, while these soulful lyrics for the songshavebeenpennedbyNisarAkhtar,SeemaBhatt&Shahid Anjuman. Aasha Bhosle, Shaan, Palak Munchal, Asees kaur, Shahid malya, Mudasir Ali, Avik Dojan Chatterjee, who have lent their mesmerising voices to the songs of the film. The film is slated to hit the theatres on December 13,2019.