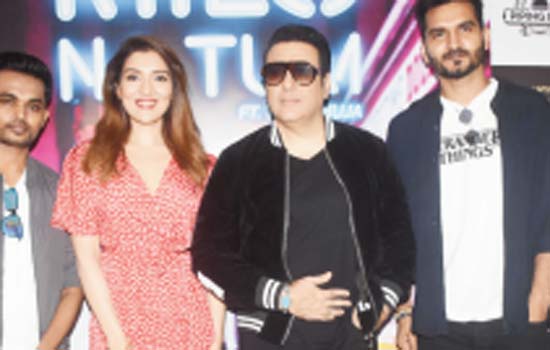 Brand-new multi-specialty Resto Bar Piping Hot hosted actressTinaAhujaandsinger-composerGajendraVerma,along with producer HitendraKapopara, the beloved Govinda, music video director Aman Prajapat, and others for the media interaction of the recomposition of the evergreen ‘Milo Na Tum’, featuring Superstar Govinda’s daughter TinaAhuja in an alluring avatar opposite Gajendra Verma himself! Given the fantastic venue, the guests and press were plied with scrumptious snacks and welcome drinks amidst all the revelry. With remakes taking over the music scene, it is now the strength of content and production quality that makes the vital difference. The latest music video remake on the block, 'Milo Na Tum' is from a diamond jubilee cult film ‘Heer Ranjha’ and the classy remake has an amazing story to tell. Produced by Hitendra Kapopara, ‘Milo Na Tum’ is recomposed and sung by Gajendra Verma. Shot in the beautifully scenic locales of the United Arab Emirates by eminent music video director Aman Prajapat, ‘Milo Na Tum’ was an enlightening experience for the team!Having personally been there at the shoot location to support his daughter, proud father Govinda averred, “I was lucky to witness my daughter shoot so amazingly! She has put in a lot of effort with the entire team and the result shows.” It must be good when the composer himself is on-loop! An ecstatic Gajendra Verma added, “I am in love with my own track, I have it on loop and shootingwith such a talented actress Tina was nothing more than a dream.”“Shooting in the middle of the desert has its shortcomings, but when you see people from different countries grooving to your track you start getting the vibe again,” said an overwhelmed TinaAhuja.Located at Vile Parle, Piping Hot Resto Bar was a remarkable choice for the venue, given that the place has dedicated chunks of its extensive menu to recreate dishes that our city is renowned for. Even as you choose from Indian, PanAsian or Continental food, as true-blue Mumbaikars we understand if you are beckoned by the mouth-watering Mumbai Pav Bhaji Fondue, wowwowVadaPavFondueorthenon-vegetarian’sdelightKheema Pav Fondue!