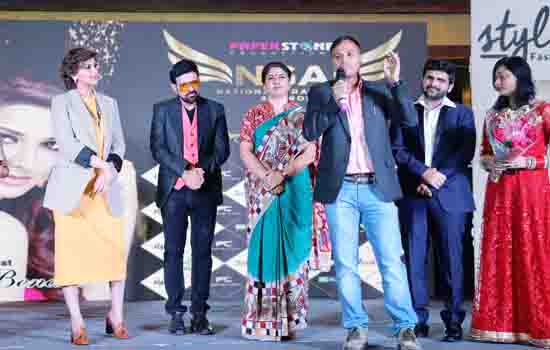 New Delhi: The National gratitude awards- 2020 function was successfully organized at Radisson Blue Hotel, Paschim Vihar, New Delhi on 7 March 2020 by Vine Arora,(Vinay Arora), Managing Director of the Paper Stone Productions and Director Gurudev Aneja, On the occasion, the people associated with politics, religious and social activities and business were felicitated at the hands of noted actress Sonali Bendre, who was the chief guest on the occasion.

Vine Arora Managing Director of the Paper Stone Productions has acted in several albums and films earlier. Similarly, Director Gurudev Aneja has directed many films, TV shows, and albums. Speaking on the occasion, both said that “many people have done commendable work in the political arena, religious, social and business arena and they have progressed as well. However, no one motivates them. If they are encouraged, they will do still better work and will progress. If they progress, the country will progress. We have started these awards to encourage people to do better work. Such successful people are felicitated through these awards”.