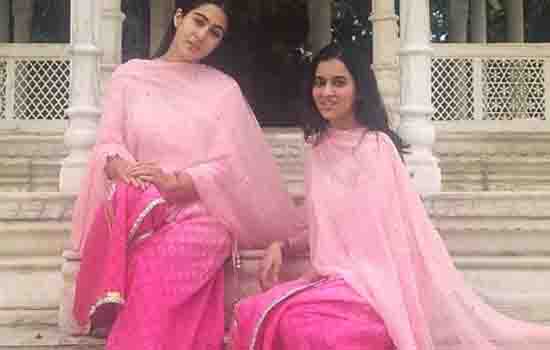 Sara Ali Khan recently featured in Imtiaz Ali's film 'Love Aaj Kal' opposite Kartik Aaryan. Post that she finished shooting for David Dhawan's 'Coolie No. 1'. Now, the actress enjoying a much-needed break with her bestie in Varanasi. Lately, the actress took to her Instagram to post a video from her Holi celebration in Varanasi Now, a fan club dedicated to Sara Ali Khan shared some unseen photos of the actress with her bestie. In these photos, we can see the girls posing for perfect photos in front of a temple. They both are twinning in pink outfits. Meanwhile, on the work front, Sara Ali Khan will next be seen in the official remake of David Dhawan’s ‘Coolie No. 1’. She is sharing the screen space with none other than Varun Dhawan in the film. While Varun will be seen essaying the role of Govinda in the movie, Sara will be stepping into the shoes of Karisma Kapoor. The posters and on-set pictures and videos of the movie have already created quite a buzz about the film amongst the movie buffs. A few days ago, the makers wrapped the film and also organized a big bash to celebrate with the team.

Post that, Sara will also be seen in Aanand L Rai’s ‘Atrangi Re’ co-starring Akshay Kumar and Dhanush.