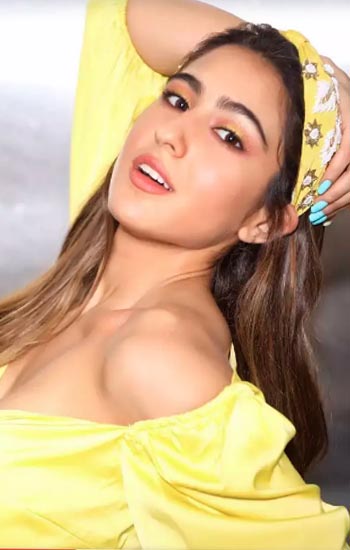 Sara Ali Khan is currently on a promotional spree for her upcoming film 'Love Aaj Kal'. The film is been helmed by Imtiaz Ali and it made headlines ever since it was announced. The film also stars Kartik Aaryan, Randeep Hooda and Arushi Sharma. The stars are currently on a promotional spree for their next and they are leaving no stones unturned. Recently, Sara took to her Instagram handle to share some stunning photos and we are all hearts!In these photos, we can see the actress in a wearing a yellow knot front top which she paired with a similar coloured hairband. The star captioned the post as, ''Gun-guna rahe hai bhavreKhil rahi hai Kali Kali 🌻💐🌷 📸: @shivangi.kulkarni''. Talking about her make up the star for a dewy look and a dash of pink nude lips. Talking about 'Love Aaj Kal', it is about two love stories across two timelines and with Kartik Aryan playing dual roles. In the 2020 romance, Kartik is paired opposite Sara Ali Khan, while Arushi stars opposite Kartik in the love story set in 1990.The film is Imtiaz Ali's second film with the same name. The first film starred Sara's father Saif Ali Khan and Deepika Padukone in pivotal roles. It releases on February 14, Valentine's Day.