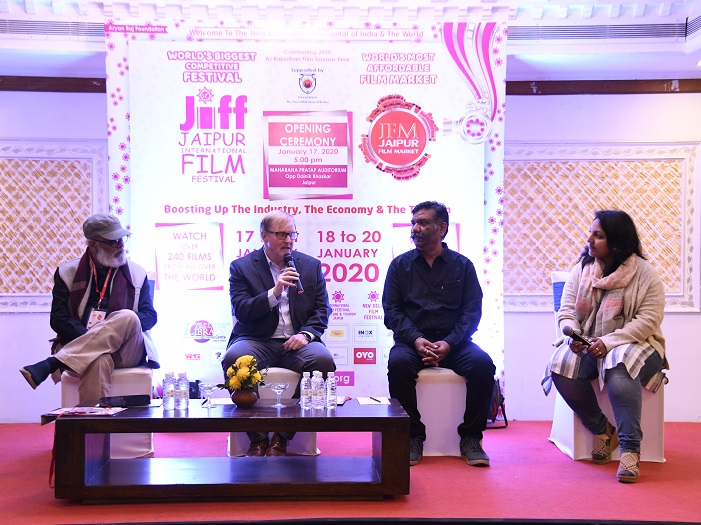 
Jaipur.On the third day of the Jaipur International Film Festival - JIFF 2020, the fair of continuously screening films was held; the veterans also spoke on key issues related to the world of Cinema. The International Co - Production Meet took place, where the Film Makers and Producers interacted.


It is worth noting that Jaipur International Film Festival [JIFF] 2020, supported by Tourism Department, Government of Rajasthan is going on at INOX Cinema Hall, [G.T. Central] and Hotel Clarks Amer.


Spotlight is an American biographical drama film directed by Tom Macarthy. The film, made in 2015, is about INVESTIGATIVE JOURNALISM of the oldest Newspaper in the United States. The film is based on the Boston Globe team, which investigates the events of Child Sex abuses spreading across Boston. It is noteworthy that the Spotlight team was awarded the Pulitzer Prize 2003 for Public Service for these News Stories. The Film has been awarded with Oscar Award for Best Picture.


Especially for Media Persons and Journalists, this Special Non-Commercial Screening has been organized by Haridev Joshi Journalism and Mass Communication University.


At 11:30 in the afternoon, there was a session on Audience of 21 Century – Their Senses and Sensibilities, in which film director Hariharan, Raj Shekhar [Lyrics Writer of Films like Tanu Weds Manu Returns, Tumbad, Vire de Wedding] Journalist and Writer Tejpal Singh Dhama, Film Maker Mayur Kataria from Australia put their words forward. Film maker Lom Harsh played the role of moderator. The session included discussion about sensitive subjects like LGBT community and Freedom of Speech.


Raj Shekhar, who has penned songs for many films, said in a pinch-like manner that the checks he gets from film producers for writing, inspire him to write good. At the same time, during the session, Tejpal Singh Dhama told that he wrote his first novel Ajay Agni for his wife, so that he can introduce her to the proud history of the ancient women of India. It is worth noting that the film Padmavat, which had been the subject of discussion across the country, is based on his novel Agni Ki Laptein. Dhama told that his books have also gone to trial, and he also shared an anecdote related to Padmavat film, how he got caught up in the talk of the film people. Dhama said that Indian cinema is more commercially oriented, and less accountable. In such a situation, honesty is very important in the world of Journalism and Cinema.


Mayur Kataria, who made Transgender Films, opined in a fiery tone during the session that India is the only country, where there are more than 50 lakh eunuchs, they are recognized in the country, but still they are very backward. They still do not have access to basic education and other facilities. LGBT community need to bring their issues to limelight. Significantly, there were also transgender actors present in the session, who expressed their agreement on the subject.


Accidently I turned out to be Lyricist – Raj Shekhar


The special activity of the day was a gripping conversation on film songs, in which Raj Shekhar, who composed songs for big films like Tanu Weds Manu, Uri, Saand Ki Aankh, Tumbar, spoke openly. Senior Journalist and Writer Ish Madhu Talwar questioned Shekhar in a very interesting manner.Shekhar in a very sarcastic manner asserted that I am a fugitive of literature, and becoming a Lyricist has become like an accident in my life. Shekhar told that Tanu Weds Manu’s song main ghani bawali hogi was a very successful song, which he wrote it in just three hours. Shekhar, a resident of Madhepura village in Bihar, told in light manner that when all his friends left Delhi and went to Mumbai, he also moved to Mumbai. Shekhar, who started his career with Assistant Direction, went on to become a successful Lyricist later.Talking about the process of writing the song, Shekhar said that now the songs in films have started being made in the colloquial language. At the same time, Shekhar also said that even today writers are not able to get name in the credits of Song Writing, and they have to struggle a lot for this.In the second panel of the session, Vinod Bhardwaj (senior journalist) and Dr. Rakesh Goswami had a conversation about Rajasthani Cinema: An Invitation for New Beginning 1942 – 2019. In this conversation he discussed about the development of Rajasthani cinema and the difficulties faced by it. Goswami said that the biggest weakness of Rajasthani cinema is that Rajasthani film makers do not want to make a good film, they do not have to be serious about making a film. Films are making less in Rajasthan, the level of films is also very low and their publicity is negligible, so that people do not know whether Rajasthani films are being made or not. In such a situation, this is the biggest reason that Rajasthan cinema has no name in regional cinema.From 1 to 1:30 p.m., Watching Films - Theatre to Mobile, Film Promotion and Marketing Conference was held, with Shorts TV [USA] CEO Carter Pilcher, Film Critic Ajay Brahmatmaj, Animation Film Designer Dhigmant Vyas participated.  In this conversation, the speakers talked about the films being made on mobile, today said that today is the era of mobile, in such a way, today the audience does not need to go to the cinema hall to watch the film, they can easily see it in their phone. Watching a film in the cinema hall is also very expensive, in such a way, the rural audience and the deprived people cannot go to the big cinema hall and see those films, in which mobile is a very good source. This discussion started on cinema also reached politics. Ajay Brahmatmaj told that the film makers have to face a lot of financial problems; there are many films which are not released due to distribution or any other reason, whose budget is in crores, the film makers have to suffer the loss. Along with all this the speakers also discussed fake news and its reasons.


Next, Short Films - Way to Theatre was held at 3 p.m., in which Shorts TV Team held a meeting and discussion in Baithak hall.


The very important Meet took place at 4 p.m. at Hotel Clarks Amer, which was managed by JIFF Founder Hanu Roj, where Film Producers from more than 25 countries participated.


The screening of films continued on the third day of 2020. The audience enjoyed the performance of films from the country and abroad. Movies released on January 19 were - Helmet Saves Life, Waiting Till Today, Festival at the Cranes, Crossing the River of Life, Mosul, How I Live, Vasanti, Her Rebirth, Invisible Citizens, Major Nirala, Abode, Five Point Three , Tu Pyar Ka Sagar Hai, Ek Asha


etc.Films related to the colourful land of Rajasthan were also screened. Among them are the films like Albelo Jaipur, Desi Bands, Raat / Khas, Kareeb, Don't Drink and Drive, which are based on different aspects of the state.


The festival is going to have several SPECIAL SHOWS for film lovers. Veteran director V. Shantaram's film Padosi would be one of the SPECIAL SCREENINGS. Especially for V. Shantaram's fans, this film will be screened at INOX [G. T. Central] in Screen 1 | Audi 1.


V Shantaram's well-known film Padosi [1941] is a film touching social issues. This social drama makes the film special and relevant in today's times, its subject, which speaks of Hindu-Muslim unity.


Seeing the Oscar winning film Daughter, Doobie will be a special experience for film lovers.


Various Dialogue Sessions Today, including Rakesh Om Prakash Mehra and many other dignitaries


On the third day, January 20 from 12 to 1:30 p.m., Regional Cinema of India - Today and Tomorrow, Diversity of India - Reflection in Indian Cinema session will take place. It will be attended by Tigmanshu Dhulia, Director and Writer of Gangs of Wasseypur and Paan Singh Tomar, Bala writer Niren Bhatt, Lal Kaptan writer Deepak Venkatesan, Indranil Ghosh and Rajasthani Film Director Radheshyam Pipalwa. At the same time, Film Maker Gajendra Kshotriya will be the moderator.


After lunch, there will be a session on World Cinema by Women from 2 to 3 p.m. with Tigmanshu Dhulia, Abhijeet Deshpande, Good News film writer Jyoti Kapoor, Director, Cinematographer and Founder of Mumbai Talkies Seema Desai, Tejpal Singh Dhama and Greece's actress Maria Alexa will speak.


There will also be an important session - Cinema of Change, in which well-known Film Director Rakesh Om Prakash Mehra will communicate with the audience.Cinema and Society: Contemporary Context Dialogue was held from 4 to 6 pm, in which Haridev Joshi University of Journalism and Mass Communication Vice Chancellor Om Thanvi will be present as the Chief Guest. The dialogue will be headed by Prof. Naresh Dadhich, while as a speaker, Prof. Suresh Batra, Hariram Meena, Rajendra Boda and Dr. Durga Prasad Aggarwal will be on the stage.


Sun Rises from the East Pole is a Feature Fiction Film directed by Phenoix Dong.Chinese cinema is growing very fast with more international ideas, especially for the young people. Co-producer of Sun Rises From The East Pole Shyaoom told that it's a different story for the people of China. Through this film they want to change peoples' perception towards love. About their experience at JIFF she said that she always wanted to come to India and she's trying to know more about the country. She looks forward to attending JIFF every year as its good for cultural exchange.


The director of the short fiction film Doobie, Keith Gomes told us that the story runs around a 5 years old boy, who is a rug picker finds a little girl's vanity box and her photograph. This film is different because the children, who worked in it are real rug pickers, non actors. For audience it is going to be very interesting as it has innocent love. To budding actors he says to keep making the short film and reading more and more.